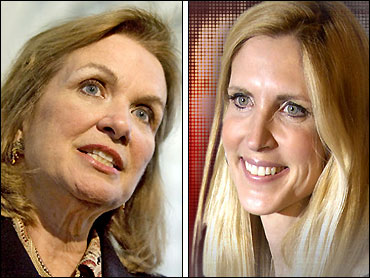 Elizabeth Edwards pleaded Tuesday with Ann Coulter to "stop the personal attacks," a day after the conservative commentator said she wished Edwards' husband, Democratic presidential candidate John Edwards, had been killed by terrorists.

"The things she has said over the years, not just about John but about other candidates, lowers the political dialogue at precisely the time we need to raise it," Edwards said by phone on MSNBC's "Hardball with Chris Matthews," where Coulter was a guest.

Elizabeth Edwards said she did not consult her husband before confronting Coulter on the air, adding that she felt the pundit's remarks were "a dialogue on hatefulness and ugliness."

"It debases political dialogue," Edwards said. "It drives people away from the process. We can't have a debate about issues if you're using this kind of language."

Coulter responded with a laugh, and charged that Edwards was calling on her to stop speaking altogether. She questioned why Elizabeth Edwards was making a phone call on behalf of her husband, and criticized John Edwards for "stealing doctors' money" during his successful career as a trial lawyer.

"I don't think I need to be told to stop writing by Elizabeth Edwards, thank you," Coulter said.

Coulter appeared Monday on ABC's "Good Morning America," where she was asked about her March speech to the Conservative Political Action Conference in Washington. During that talk, Coulter used a gay slur to refer to Edwards.

"If I'm going to say anything about John Edwards in the future, I'll just wish he had been killed in a terrorist assassination plot," Coulter said Monday, riffing on remarks made by HBO's Bill Maher.

He suggested in March that "people wouldn't be dying needlessly" if Vice President Dick Cheney had been killed in an insurgent attack in Afghanistan.

With the close of the second-quarter fundraising period approaching Saturday, the Edwards campaign quickly turned Coulter's comments into fundraising fodder. Edwards adviser Joe Trippi sent an e-mail to supporters Tuesday, saying critics "will stop at nothing to tear John down."

"We are fighting back, but we need your help," Trippi wrote. "Give what you can today."

During the brief "Hardball' segment, during which both Edwards and Coulter frequently interrupted and talked over each other, Coulter criticized the Edwards campaign for using her comments to raise money.