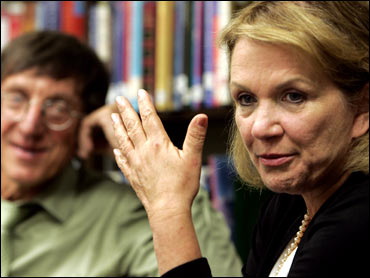 Six months after being diagnosed with incurable cancer, Elizabeth Edwards is pushing hard for her husband's presidential bid, serving as both campaign surrogate and political pit bull.

In fact, the wife of Democratic presidential hopeful John Edwards spends more time campaigning than she did before March, when she learned the breast cancer she fought in 2004 had spread to her bones.

"We have a lot of time to make the difference. The truth is we don't have all the time in the world," she said Wednesday in a campaign donation appeal that could just as well apply to her future.

In the last week, Edwards walked a picket line with striking United Auto Workers in Michigan, attended fundraisers in New York and courted voters in the early primary states of South Carolina and New Hampshire. She's on the road five or six days a week.

Hargrave McElroy, who traveled with Edwards during the 2004 campaign, said she expected a less hectic pace when she began to accompany her longtime friend again last month. That hasn't been the case. "This is the 'I've been sick schedule?"' an incredulous McElroy asked Edwards after two days back on the trail. "Who are you kidding?"

In a recent interview with The Associated Press, Edwards said her health has remained stable and she feels no significant side effects from the pill she takes daily or the intravenous infusion of drugs she gets every few weeks.

"I honestly have just as much energy as I had in the beginning, and my schedule is even worse," she said, quickly correcting that characterization to "more full."

Her role in the campaign includes more than simply putting in appearances. She has been the point person in criticizing her husband's rivals, suggesting that Hillary Rodham Clinton copied her husband's health plan and Barack Obama swiped material from John Edwards' 2004 campaign.

Edwards makes no apologies for her outspokenness and relishes a leading role. She says she doesn't dwell on the prospect of her death, though with two young children - Jack, 7, and Emma Claire, 9 - it surely must be on her mind. Moreover, she's no stranger to the subject: a teenage son, Wade, died in 1996.

"Realism doesn't buy you anything. Giving up hope gets you nowhere," she said in the AP interview. "Advances are made every day and the second I give up hope is when I start dying. And I am not doing that. If cancer takes me, cancer takes me, but I'm not going to give it a minute more than I absolutely have to. "

During two days in New Hampshire, Edwards mentioned her illness only in passing, jokingly blaming her inability to recall the word "reciprocity" on "chemo-brain." No one brought it up during the public appearances, though some approached her privately to offer encouragement and share their stories.

"My wife's a cancer survivor," one man told her at Bow Memorial School library. "You will be, too."

Being a magnet for sad stories, like the New Hampshire mother and daughter who both lost sons, can be draining, Edwards said.

"Can there be at the end of a really trying day where I'm sort of out of hugs? That happens now and again, but honestly not very often, because you don't just give one, you get one," she said.

Sharon Czarnecki, who had Edwards sign a copy of her book at a house party in Hooksett, N.H., said she admires her for sticking with the campaign.

"I found today very meaningful because she has limited time - I hope not too limited - and this is how she chooses to use it. That's quite a statement," said Czarnecki, who said she hasn't decided on a candidate.

Another undecided voter, Jen Lemen, said she found it hard to focus on John Edwards' candidacy until she met his wife at a convention of female bloggers in July.

"Anytime I would see him on TV or see him speak, I almost couldn't tune in because I was wondering if they were OK," said Lemen, a writer and artist from Silver Spring, Md. "I didn't want to judge her, but my kids are little like hers, and I couldn't get past the reality of that. You could be dying, your illness could kick up any time."

When Lemen teared up, Edwards consoled her, putting her hands on Lemen's shoulders.

"You know John and I lost a child?" Edwards told her. "We know how important it is to not live our lives with regret."

"She really responded to me from her heart," Lemen said. "I felt like we were talking woman to woman, mother to mother. I didn't feel any artifice."

Edwards said such moments often are as much about the other person as they are about her. By being open about a situation that plays to everyone's worst fears, "I sort of gave them a permission slip to go ahead and follow through on their inclination to make a connection," she said.

"In a sense I took off my clothes and stood in the middle of the street and said, 'this is how I am,"' Edwards said.