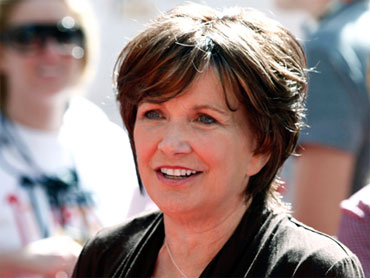 Elizabeth Edwards' doctors say her long battle with cancer is coming to an end, and she may have only weeks to live.

She's at her Chapel Hill, N.C. home, surrounded by friends and family.

CBS News correspondent Nancy Cordes reports doctors have told the wife of former presidential candidate John Edwards treatment would no longer affect her outcome. Doctors say she is not in any pain and is saying her final farewells to loved ones.

Edwards, 61, posted a message on Facebook signaling her six-year battle against cancer may be closing.

Edwards wrote, "The days of our lives, for all of us, are numbered. ... The days I do have are made all the more meaningful and precious."

She is a lawyer with a lengthy resume and raised four children: grown daughter Cate, Wade, who died in a car accident in 1996, and Emma Claire, and Jack, who came later.

Lately though, she's been identified most with her private battles, first her health, and later her troubled marriage to John Edwards.

The former senator was John Kerry's running mate in the 2004 presidential election. The day they conceded defeat, Elizabeth announced she had been living with breast cancer during the campaign. After chemotherapy, surgery and radiation, the family hoped the worst was over.

Yet, soon after her husband launched his second presidential bid in 2006, doctors told her the cancer had returned, this time spreading to her bones, and could not be cured.

In 2008, John Edwards admitted publicly what he had already confessed in private, saying, "She understands what I understand, which is that I am imperfect. I made a very serious mistake."

That "serious mistake" was that he'd had an affair with campaign videographer Rielle Hunter.

On Monday, she reached out to all those on Facebook who stood by her these turbulent few years.

She wrote, "It isn't possible to put into words the love and gratitude I feel to everyone who has and continues to support and inspire me every day...To you I simply say: you know. With love, Elizabeth."

Betsy Gleick, executive editor of People magazine, which first reported Elizabeth Edwards' current condition on its website, said, "She is at home, she is surrounded by loved ones. Her children are all there. She has good friends there. Her sister is there. And they are sort of hanging out and talking and looking at photos, and that's what we know. She's obviously very sick. She had stomach pains over Thanksgiving, and they found that the cancer had spread to her liver."

Ashton said, "The unfortunate reality when you're talking about cancer, and cancer treatment, is that not all cancer is curable. So, a large part of cancer treatment involves treating the cancer, and the sites to which it has spread. Really, once cancer is in the liver, the big concern is that the liver is not able to clear the toxins that our body produces, and actually there usually isn't that much pain. Some people might get a little disoriented. They might get a little tired and eventually slip into a coma. But obviously, this shifts the medical focus from cure to treating the patient's symptoms and making them as comfortable as possible. So, it's not that you're not treating the patient anymore. You're just not trying to cure the cancer."

When asked if Edwards is looking at hospice care, Gleick said Edwards is viewing her treatment as she did her life.

"She is doing this her way," Gleick said.

"Early Show" co-anchor Erica Hill noted part of her plans have been to prepare her children. Hill said Edwards has been writing letters and preparing her children.

Gleick said, "She has been writing letters to them, she has been going through her things for years. And she has been writing these books. I mean, she's trying to be both a public example and a private example of the things that she mentions on her Facebook posting -- the sense of resilience and faith -- and that is how she is coping with this."

Among those around Edwards is John Edwards.

"He's there," Gleick said. "He's in and out. He lives nearby. He is the father of their three children, who are there. He will be taking care of these children, and he's very much a presence."

Ashton said having friends and family around during this time is beneficial.

She said, "It's something that I've said quite a bit in my own practice. It's a privilege to be with someone when they come into the world. But it is similarly a privilege to be someone as they leave the world. And so being surrounded by their closest friends and family is so important. And it is an example of grace to know, both as a doctor and as a patient when to say, I've had enough."