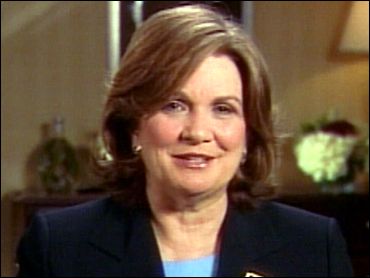 Tonight in Boston, Sen. John Edwards will officially accept the Democratic Party's vice presidential nomination and talk about "the big themes" of the campaign.

His wife, Elizabeth, will be talking about him.

Mrs. Edwards, who will introduce her husband at the convention, said she is more at ease about her impending speech, having toured the podium earlier this week.

Mrs. Edwards told The Early Show co-anchor Hannah Storm
she made a late visit to the convention hall Tuesday night to get ready. And once on stage, she said, she realized it was not as scary as she thought it would be.

"It felt more intimate than you'd expect if you were standing on the sidelines watching it," she said. "So I feel more at ease than I did yesterday morning."

She said her husband will deliver what he has promised: A very positive speech in keeping with the nature of his campaign thus far, with specifics on Iraq, on the economy, and terrorism.

Elizabeth Edwards should also give a strong performance Wednesday night, say members of the North Carolina delegation who know the former law school standout at the University of North Carolina.

Mrs. Edwards' intellect, termed "a weapon of mass destruction" by a former courtroom rival, is one side of what she brings to the 2004 campaign as wife of the North Carolina senator and Democratic vice presidential candidate. She is also his close adviser and image consultant.

Last winter in the early primary states, Elizabeth Edwards routinely campaigned on her own or spoke to overflow crowds at venues where her husband stumped. She joked about looking her age, now 55, while her husband still looks much as he did when they met in law school.

She warned audiences she might have to "plead wife" if they asked questions she wasn't sure how to answer. Then she fielded inquiry after inquiry on her husband's views.

Elizabeth Edwards made her first solo appearance promoting the Kerry-Edwards ticket last week in Tennessee, where she dedicated a chapel for the Children's Defense Fund and pledged that her husband will help children, especially those in poverty.

Mrs. Edwards will be introduced at the convention by 22-year-old daughter Cate, a recent Princeton graduate.

"I'll just talk about her and how great she is," Cate Edwards told Storm.

Considered a gifted speaker, Sen. Edwards had a few words of advice for his oldest daughter.

"He's told me not to be nervous, which is, like, the worst advice in the world," said the 22-year-old. "I can't help that. He told me to relax and be myself."

Being herself caused a bit of controversy for the wife of presidential candidate John Kerry, Teresa Heinz Kerry, who told a reporter to "shove off." Asked about the incident, Mrs. Edwards said, "I think that it must have been a kind of slow news day for that to have gotten the kind of attention that it got. I think it's the normal kind of frustration somebody feels when someone doesn't let go of or accept an answer and I think she was frustrated. I think it got more attention than it needed to have gotten."

As for her own challenges, campaigning with 6-year-old Emma Claire and 4-year-old Jack, Mrs. Edwards said so far she is getting a lot of help.

"There are a lot of people on a campaign, and Emma Claire and Jack have won most of them over," she said. "There's always somebody happy to play with one of the two of them. Last night might have been an exception, when Jack didn't want to go to bed for a very long time. But in general, there's a lot of help around. So I don't lack for any kind of help that I could possibly want with the two of them."

Elizabeth Edwards has what Teresa Heinz Kerry calls a "Mother Earth" quality. Her grounding in life is familiar to most Americans: raising kids, coaching soccer, volunteering at school, struggling with her weight, and juggling work and family.

Mrs. Edwards has been the subject of numerous profiles in the national media since Sen. John Kerry picked her husband as his running mate three weeks ago. They invariably recite the same personal details: that she dyes the gray out of her hair, that she struggles with her weight, that she calls herself the "anti-Barbie," that she's an insomniac (on sleepless nights now, she reads, watches C-SPAN, shops online and sometimes Googles her husband).

After the convention, Elizabeth Edwards will be back on the campaign trail, both with her husband and by herself.

And as for her daughter Cate, who wants to be a lawyer like her folks, she plans to work as a researcher at Vanity Fair magazine.