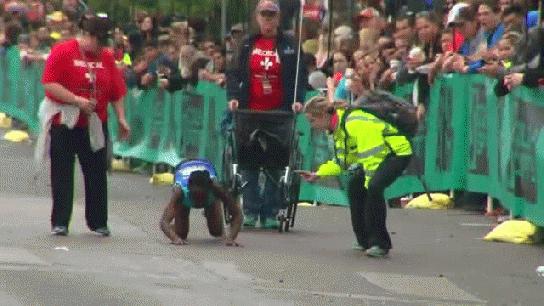 The 2015 Austin Marathon and Half Marathon saw thousands of runners celebrate at the finish line over the weekend.

For one runner, however, the end brought a different kind of celebration.

Hyvon Ngetich of Kenya was leading the elite women at the 23-mile mark when her body gave out, reports CBS affiliate KEYE-TV in Austin.

Rather than quit, she began crawling on all fours. Race volunteers approached with a wheelchair, but she refused to take it.

The crawl was exhausting, and Mgetich was forced to pause at one point, but she made it.

Afterwards, Austin Marathon race director John Conley said to her, "You ran the bravest race and crawled the bravest crawl I have ever seen in my life. You have earned much honor, and I am going to adjust your prize money, so you get the same prize money you would have gotten if you were second."