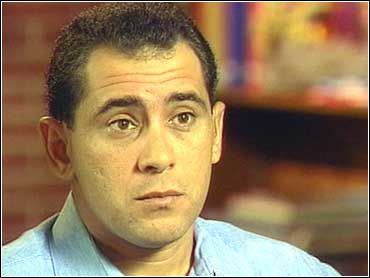 In an exclusive one-on-one interview with Dan Rather, Elian's father, Juan Miguel Gonzalez, talked about the ups and downs his life has taken over the past few months.

Gonzalez spoke candidly about his love for Elian and his frustrations with the long process of trying to regain custody.

Gonzalez' Relationship With His Son

Gonzalez says that he had no idea his ex-wife would try to go the United States. "Had I known, this wouldnt have happened," he says. "At no time did I know that his mother wanted to go to a new country. She was living well in Cuba, and she had everything she needed. She loved her son very much, and she didn't know how to swim."

Had he known, he would not have allowed his son to go, Gonzalez says. "I would have never let them separate him from me," says Gonzalez, who is increasingly frustrated to still be separated from his son, has not seen him and has only spoken to him a few times on the phone.

He is angry that television crews have been allowed to trail Elian to places like Universal Studios and Disney World. As 60 Minutes reported, Gonzalez is also outraged that his family in Miami released a videotape, in which Elian said he didn't want to return to Cuba; Gonzalez thinks his son was coached to say those remarks.

Gonzalez criticizes the Cuban American National Foundation for orchestrating the heated protests in the streets outside the home where Elian is staying.

"The only thing they're doing is using him as a political tool," he says. "In fact, that foundation seems to have been living and sleeping there with them from the beginning. It looks as though the foundation is part of the family. I am a father trying to claim his son, a father suffering for his son, a child who has lost his mother, tragically. And where he needs to be is alongside his father. It's cruel, it's cruel what they've been doing to my son."

Jorge Mas Santos, the director of the Cuban American National Foundation, says that Elian has not been kidnapped, as some have claimed. "That's absolutely false," he says. "[That is the] line that Fidel Castro wants the world to buy."

Responding to critics who say he is a puppet for Castro, Gonzalez says that he is his own man. "Why do you have to mix Fidel Castro into this?" he asks. "Simply, it's me, his father asking for my son. I want to return to Cuba. I like Cuba. I love Cuba. Tat's where I want to live, that's where I want my son to be raised at my side."

Gonzalez also dismisses the idea of living in America with Elian. "I don't like this country," he says, referring to the United States. "I like Cuba. In Cuba I can do what I want to do."

Cuba, Gonzalez says, is where his son should be raised: "The best for my son is to be raised where I was raised, to live where I have lived and to make himself a good man where I grew up to be a good man."

Gonzalez says he feels very close to his son. "He is a boy that his mother and I wanted very much," he says. "Despite the fact that his mother and I had been together for many years, we tried very hard to have a baby. We lost seven pregnancies. And due to a treatment that my wife received, we had a successful pregnancy. As I said, it was a boy that we wanted very much."

How Elian Ended Up in America

Gonzalez says he and his former wife Elizabeth both loved Elian very much.

But the strain of having Elian contributed to the breakup of the marriage, according to writer Anne Louise Bardach. In reporting a new story for George magazine, Bardach spoke to family members in Elian's hometown, Cardenes.

"She had really been with Juan Miguel for 13 years of her life," Bardach says. "They met when she was very young. Cardenes is a small town where people know each other and go to school together. And they were married young. And for years they tried to have a child, and what the family says is the marriage just kind of fell apart over the strain of trying to have; they had infertility problems. And she had seven miscarriages."

Trying to have a child caused a strain in the marriage, Bardach says. Elizabeth moved out of the house, and a few months later met Lazaro Munero, in many ways the opposite of her ex-husband, according to Bardach.

Bardach describes Gonzalez as a "staid, reliable, traditional guy," and Munero as "the wild guy in Cardenes: discos, motorcycle races." Elizabeth fell in love with Munero, and never went back to Gonzalez, Bardach says.

But Munero had legal troubles in Cuba and decided he had to flee, Bardach says. "Munero had a lot of problems in Cuba," she says. "He was often arrested. He was into [the] black market. He was in and out of trouble with the law in Cuba. He came feeling like he really had no choice. He really couldn't make do in Cuba."

Munero fled to Florida and for several months worked in a parking lot washing and polishing cars. But he missed Elizabeth.

hen he was released, Munero went back to Cardenes and convinced Elizabeth to go with him to Florida. In Bardach's view, Elizabeth left Cuba not for a better job or for democracy, but to be with Munero. "[Elizabeth's] best friend said to me, 'Elizabeth was too much in love,'" Bardach says.

So much in love with another man, Gonzalez says, that last November she began planning to leave - with Elian.

"On Wednesday, [Nov.] 17th, I went and I picked up the boy when I got out of work," Gonzalez remembers. "He stayed over that night, and he slept between me and [my] wife, my new wife. He slept over Thursday night also. Friday we woke up together; I went to work, and my brother took him to school."

That was the last time Gonzalez saw his son. That weekend rumors began that Elizabeth, Munero, Elian and 11 other Cubans had left Cuba in a small, leaky aluminum boat.

"Tuesday went by, Wednesday went by, and nobody had heard anything," Gonzalez recalls. "Until Thursday, and a friend of mine comes running over crying, and he gives me a hug, and he says, they found the boy at sea, they found the kid at sea. In that moment, the rumors in my town of Cardenas [were] that there were three children that had left. When they said that, I started to cry, and I said, Is it my kid?"

Then Gonzalez says he went home, and his father was on the telephone.

Juan Miguel Gonzalez says that he then started to collect identification to prove that he was the father.

At that point, Lazaro Gonzalez, an uncle to Juan Miguel living in Miami, showed up at the hospital where Elian was taken after his rescue at sea, according to Juan Miguel Gonzalez. "My father talked to Lazero; and he [tells] him, at no time, under no circumstances, don't let the press get close to the child, don't let them use him for anything political," Juan Miguel Gonzalez recalls. "Lazaro said, 'If I have to travel to Cuba to bring you the child, I'll do it.'"

But in the weeks that followed, Lazaro Gonzalez changed his mind. Elian became something other than the 6-year-old son of Juan Miguel Gonzalez. He became a pawn and the latest victim in the United States 40-year feud with Fidel Castro.

While Juan Miguel Gonzalez admits to saying that he wants to go to Miami "with a rifle," to get those opposing his son's return to Cuba, he says that he should not be taken literally. "I said it as an expression of hatred and aggravation that I was feeling inside about everything that was going on," he says. "Not because I was actually going to do any of that.">

Even with all the frustration he feels, Juan Miguel Gonzalez says he can forgive those who have opposed Elian's return.