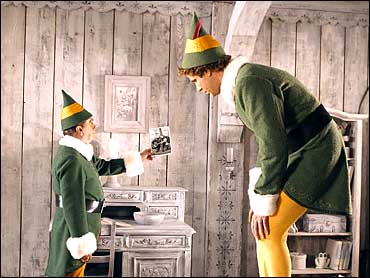 Will Ferrell's "Elf" took the pole position at the box office, scuttling Russell Crowe's "Master and Commander: The Far Side of the World" to finish as the weekend's No.1 movie.

"Elf," about a man-child raised by Santa's helpers at the North Pole, took in $27.2 million, off just 12 percent from its second-place debut the previous weekend, according to studio estimates Sunday.

"Master and Commander," a Napoleonic-era naval adventure based on Patrick O'Brian's novels about an intrepid British captain, debuted a close second with $25.7 million.

"It just goes to show you, a sugar diet is better than what they eat on those ships," said David Tuckerman, head of distribution for New Line, which released "Elf." "We have a movie that's playing from 8 to 80. It's a sweet, family movie, and Will Ferrell does a spectacular job."

Audiences jumped ship on the previous weekend's No. 1 movie, "The Matrix Revolutions," which finished in third place with $16.3 million, down a steep 66 percent from its debut.

"Looney Tunes: Back in Action," opened at No. 5 with $9.5 million. The movie stars Brendan Fraser, Jenna Elfman and Steve Martin alongside Bugs Bunny, Daffy Duck and other cartoon characters.

In narrower release, "Tupac: Resurrection," a documentary about the slain rapper, premiered with $4.7 million to finish at No. 9.

The overall box office fell, with the top 12 movies grossing $124.2 million, down 23 percent from the same weekend last year, when "Harry Potter and the Chamber of Secrets" debuted with $88.4 million.

Elf" lifted its 10-day total to $71.3 million. While "Elf" will run into stiff family-film competition with this week's debut of "Dr. Seuss' the Cat in the Hat," the movie should get a solid bump in business over Thanksgiving weekend and play solidly through Christmas.

"'Elf' is a giant," said Paul Dergarabedian, president of box-office tracker Exhibitor Relations. "This movie's going to have a long shelf life through Thanksgiving and Christmas.

Releasing it very early in the season was a smart move, because it's just building steam heading toward the two big holidays of the season."

"Master and Commander" cruised beyond the expectations of distributor 20th Century Fox. Bruce Snyder, the studio's head of distribution, had figured the movie would come in a bit under $20 million for opening weekend.

"It's an amazing number for an adult movie," Snyder said. "We can't be disappointed at not being No. 1. `Elf' is a very different movie. It's a broad comedy for everybody."

"Matrix Revolutions," the final chapter in the Wachowski brothers' sci-fi trilogy, pushed its 12-day domestic gross to $114.2 million, but it will finish far below last spring's "The Matrix Reloaded," which topped out at $281.5 million domestically.

Distributor Warner Bros. is focusing on the final movie's worldwide figures, which have climbed to about $310 million in less than two weeks.

"When you look at the global numbers and where we are on the three movies altogether, it's a tremendous number," said Jeff Goldstein, Warner general sales manager.

Rich countries are making fast progress toward immunizing their entire adult populations, but dozens of less wealthy countries have yet to receive their first dose.

Pope Francis is describing his trip to Iraq as an "emblematic journey," the first time any pontiff has set foot in the birthplace of Abraham of the Old Testament. Nicole Winfield, Vatican correspondent for the Associated Press, joins CBSN with more on the four-day journey, which comes amid rising COVID-19 infections and security concerns.