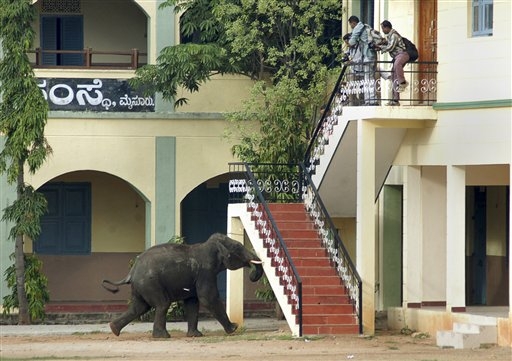 Television footage on New Delhi Television news channel shows the body of a man at the feet of one of the animals in the city of Mysore on Wednesday. The footage also shows an elephant angrily kicking a cow.

One elephant caused panic as it ran through the streets.

The second one got into a fenced-in college compound.

Government officials asked residents to stay indoors and not throw stones at the raging pachyderms. They managed to tranquilize the animals to return them to the wild.

Every year, hundreds of people across India die when wild animals wander into cities as their natural habitats shrink and they have to range farther for food.

India's national parks suffer massive encroachment from people who live and forage for food in the forests or graze their cattle inside.

CBS News correspondent Jeff Glor reported on the rampage on "The Early Show."