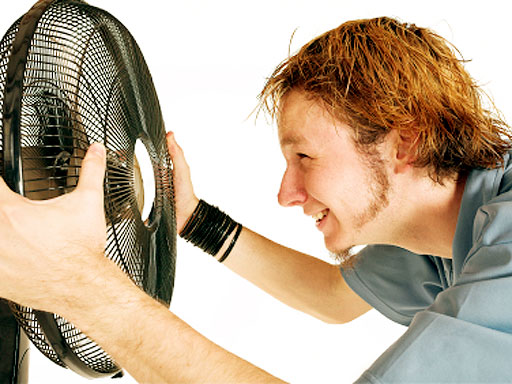 (CBS News) In a young summer that's already had record-setting heat waves, countless Americans are desperate for ways to stay cool. For those who don't have air conditioning, an electric fan propped in front of the window is a tried and true method to cool off - or so once thought.

Researchers from the Cochrane Collaboration, a nonprofit medical research group, reviewed international studies in search of evidence that could guide policy decisions on fan use and heat safety.

The researchers say heat waves are set to become more common and effects from them can be devastating, as evidenced by an August 2003 heat wave in Europe that left up to 30,000 people dead. In the U.S., high heat from the Midwest to the East Coast has killed at least 46 people.

What's more, high temperatures can exacerbate other chronic diseases which can lead to a person's early death. High-risk people including the elderly, very young or people with respiratory, heart, kidney and other chronic diseases are more likely to get dehydrated and require emergency hospitalization during a heat wave.

That's why the review group set out to see if they could issue a set of heat-safety guidelines, especially ahead of the 2012 Summer Games in London, in which many people may potentially be exposed to high temperatures, they said.

The group could not find any studies that met its criteria for meaningful evidence that said fans were a safe or effective way to stay cool during a heat wave. The research was led by Dr. Saurabh Gupta of the U.K. Health Protection Agency's Extreme Events and Health Protection Section, and was published in the July 11 issue of The Cochrane Library.

The team of researchers concluded that a fan that is not directly aimed at a person in temperatures lower than 95 degrees Fahrenheit may help one cool down. However, they said that a fan propped against a window pumping in outside air above 95 degrees could be dangerous, and might actually cause a person's body temperature to increase, putting them at risk.

"This is particularly important for people who are considered more vulnerable to the effects of heat, such as older adults who are less able to cool down through sweating or increasing the flow of blood to their skin," Gupta said in a press release.

While cool air on sweat may feel refreshing, excess sweating can still lead to dehydration and other dangers such as heat exhaustion and heat stroke.

"I would advise caution in using fans for elderly patients during a heat wave with a history of coronary artery disease or hypertension who are on multiple medications which have the ability to impair effective sweating or cooling," added Dr. Robert Glatter, an emergency medicine physician at Lenox Hill Hospital in New York City, in an email to HealthPop. Glatter was not involved in the new research.

If you don't have air conditioning and want to stay cool during a heat wave, Glatter suggests seeking public places with A/C, such as malls or movie theaters. He also said people should drink plenty of cool water, wear light-colored loose-fitting clothing and avoid caffeine, alcohol or sugary drinks, which can increase dehydration.

If you still want to use a fan, spray water in front of it or use a model with built-in misting.

"Electric fans, only when used with misting spray in healthy people, may have the ability to promote cooling," says Glatter.

Also, be on the lookout for symptoms that might indicate a heat-related illness. Said Glatter, "Individuals who have dry skin or who appear to be confused need to be evaluated in an emergency department immediately."

To find out more, listen to the Cochrane researchers' podcast on their fan-safety findings.