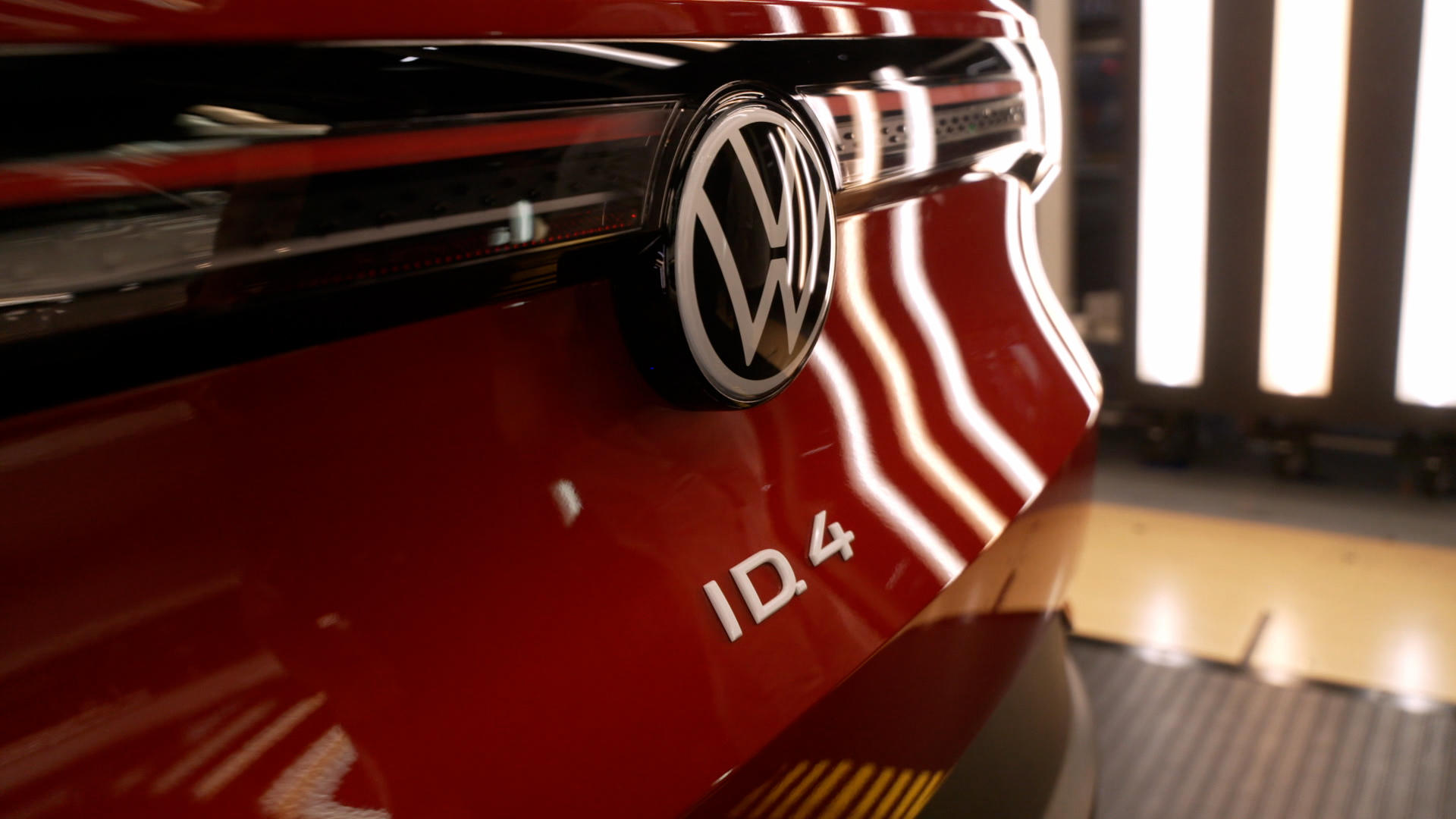 Volkswagen is neck and neck with Toyota as the world's largest carmaker. The German company, which gave us the beloved Beetle last century, raked in over $250 billion last year, selling nearly 9 million cars.

Still, it can feel more like an obstacle course than victory tour for Herbert Diess, who's been running Volkswagen for the last four years. The vast majority of the cars he sells run on gasoline – a growing problem for the planet and now – to drivers' wallets. But his most immediate problem is Russia's invasion of Ukraine, just a few hours east of Volkswagen's headquarters.

Volkswagen is feeling the repercussions of the war in Europe. In March, Ukraine was forced to shutter factories that made cabling systems so essential to Volkswagen that CEO Herbert Diess had to idle several assembly-lines in Germany.

Lesley Stahl: What did they supply you with that you're not getting?

Herbert Diess: Most of it, wiring harnesses and electrics-- electronics components.

Lesley Stahl: Are those key? How has that affected--

Lesley Stahl: So you're taking a hit?

Herbert Diess: Definitely we are taking a hit. Yeah.

They're taking another hit to their business because, to help sanction Putin, Diess suspended Volkswagen's operations in Russia.

Lesley Stahl: How concerned are you that Putin might seize your factories?

Herbert Diess: It's very difficult to understand the situation. I think it will depend a lot on how far are we getting back to negotiations.

Lesley Stahl: Volkswagen pulled out of Russia very early. I wonder how hard a decision that was for you.

Herbert Diess: It is quite a hard decision for us because we have about 7,000 people -- loyal people working for us in Russia. We have three plants there. We have customers since many years, so it's very difficult decision. But strong sanctions are probably the only measures we have currently, because what we see in Europe is really an appalling war.

He felt the appalling invasion of Ukraine required him to take action. Traditionally, Volkswagen has been mindful of its moral responsibility – given its past. The company was founded by the Nazis – who wanted to create a "people's car" – "volks–wagen."

Lesley Stahl: Do you think that Volkswagen had a sort of special obligation to act in this case, given the company's Nazi past?

Herbert Diess: I wouldn't go so far. But yes, we have this past, and probably we are-- more conscious about the-- such things.

Scenes like those in Ukraine have the European Union finally moving closer to embargoing Russian oil. Germany imports over half of its gas and a third of its oil from Russia.

Lesley Stahl: If the spigot is off, what's this going to do to the economies in Europe?

Herbert Diess: A long-lasting war could damage Europe's and Germany's welfare quite considerably, no? The impact could be quite severe to Europe.

Lesley Stahl: Do you think that it's time to go to Iran, and go to Venezuela, and go to other countries that-- you know, the West has not been dealing with?

Herbert Diess: Short term, possibly. But long term we have to go probably at even higher speed to renewables, no? To wind and solar energy.

And, he says, to electric cars. Diess wants Volkswagen to make electric versions of all its brands. And there are many – because Volkwswagen doesn't just make Volkswagens. It also makes high-end Audi and Porsche; supercar Lamborghini; luxury Bentley; and even Ducati motorcycles. At least 100 models in all, including several electric cars.

We met Diess last month in Austin, Texas. He wanted to show us the new all-electric Porsche. We discovered that Diess likes to surprise you. Even jolt you. As when he took me from zero to 60 in a couple seconds.

Or when he delivered a speech to employees on an electric surfboard. A metaphor, perhaps, for propelling the company into a new era – in the U.S. focusing on electric SUVs, like the ID.4. Volkswagen is reconfiguring its plant with 4,000 workers in Chattanooga, Tennessee, where they make gasoline SUVs, to also start making the all-electric ID.4. And Scott Keogh, head of Volkswagen America, says they're about to import a new sedan like their old Passat.

Scott Keogh: Yeah, but a super cool, all-electric, crazy high-tech Passat, if you will. And I think the next one after that would be an SUV bigger than this one.

Under CEO Diess, Volkswagen is making an extra effort in the American market.

Herbert Diess: It's difficult-- first of all, I have to accept, we lost ground here in the U.S. I think we-- we didn't take the U.S. customer seriously enough. No? We tried to sell the European product here in the U.S.

Lesley Stahl: Volkswagen does brilliantly in China, in Europe, in Latin America. I mean, why put the effort here?

Herbert Diess: This is such an important market. And there always have been discussions, although internally, "Shouldn't we give up the U.S. because we are losing money? We are going nowhere."

Herbert Diess: No, we have to come back in the U.S. We have to become relevant in the U.S. And we are in the right way.

The right way, he says, includes electrifying a new version of the Micro-bus that was popular among hippies and surfers in the 60's – calling it the ID.Buzz.

Lesley Stahl: This is the new one.

Herbert Diess: This is the new one.

Lesley Stahl: The [ID.]Buzz. And this is the old bus?

Herbert Diess: Yes. Exactly. Seventy years in between. Yeah. A lot of advancements in technology, mostly in safety.

Diess was in Austin to introduce the Buzz to a new generation at the south-by-southwest festival. He thinks taking what was cool in the 20th century and electrifying it will help VW recapture the American market.

Lesley Stahl: You know, in the United States, the best-selling vehicles are trucks. As far as I know, you do not have plans to make an electric truck for the American market.

Herbert Diess: Not yet.

Lesley Stahl: Not yet?

He's committed to having at least half his entire fleet be electric by the end of the decade – and to eliminate dozens of combustion engine models.

Lesley Stahl: You're going to have to change the engine, the transmission--

Herbert Diess: Yeah. It is a big challenge. And historically there haven't been too many cases where the successful companies in the old world could demonstrate that they are still successful in the new world.

Lesley Stahl: And you have so many competitors in the electrification area.

Herbert Diess: Yeah. It's really the new competitors which are especially challenging for us, no, coming from software background, battery background, Apple being said to entering at some stage, no? Those are probably the competitors we have to take most seriously.

To compete, Volkswagen is trying to recruit thousands of software and battery engineers worldwide. They just opened a new battery facility in Chattanooga. They don't make the battery cells yet - a Korean supplier does that. For now, Volkswagen just arranges them to fit in their cars.

Scott Keogh: We will get into the battery business. We will build more plants in America. Because it's a core necessity.

Lesley Stahl: If you're a car company you're a battery company.

Scott Keogh: You're a battery company. You're a software company.

The race is on between tech companies and traditional carmakers. Ironically, Volkswagen got a headstart from a scandal in 2015 that all but forced it to pivot to electric. At that time, over half the Volkswagen cars sold in Europe ran on diesel – which was promoted as a clean energy solution to lower emissions. But then the company was caught selling diesel vehicles with software designed to cheat on emissions tests. Eleven million cars were recalled. It cost Volkswagen over $30 billion and sent some executives to prison. Diess was new to the company at the time.

Lesley Stahl: Do you think people have forgotten it?

Herbert Diess: No, no, no, no. It's-- you know, this is a long-lasting thing. And we have to convince our customers that we are worthwhile considering, and we are delivering a good product--

To try to save the company they decided to turn away from diesel and to electric. They also agreed in a settlement with the U.S. Justice Department to invest $2 billion in green tech that includes building a large network of fast-charging stations called "Electrify America." They drove us to one near Austin.

Ryan: So you just plug it in here, get it in, click. And then your vehicle's charging. And then just push that nozzle and pull it back.

But when i tried…

Lesley Stahl: It's not easy. OK, something's wrong. I can't do it!

Ryan: There you go!

Charging problems may be the least of the challenges facing Herbert Diess. The business model of global companies like Volkswagen is coming undone as the pandemic has strained long supply lines, leading to shortages in key components like semiconductors. And in February, the company was stung by the perils of shipping when a fire sank a cargo of 4,000 of its cars. As if all that's not enough – COVID is disrupting Volkswagen in its biggest market.

Lesley Stahl: What percent of your sales come out of China?

But Volkswagen's operation in China has come under heavy criticism because one of its plants is in the home province of the Uyghur Muslim minority.

Lesley Stahl: The area where your factory is is where Uyghurs are being "reeducated." They're in detention camps. Do you worry that the message is sent that you're okay with what's going on in that part of the world–

Herbert Diess: I think that's not the message we-- we are sending, no? We can make sure with our people that there is no forced labor, that people are treated equally in our plant–

Lesley Stahl: You're sure of that?

Lesley Stahl: Do you feel, in any way, any pressure to keep that firm open from the Chinese government?

Herbert Diess: We want to keep it open. I think local people are much better off if we stay. Before COVID I have even plan to visit the plant myself, yeah?

Lesley Stahl: Will you do that?

Herbert Diess: Yeah, I will do that. I will definitely visit the plant.

For all the obstacles in getting electric cars off the ground – war, pandemic, engineer shortages – one thing is working in Volkswagen's favor: rising gas prices make electric vehicles more appealing. Last year, Herbert Diess sold more electric cars of all types than anyone, except Elon Musk.

Lesley Stahl: How close are you in terms of selling electric cars worldwide, to Tesla?

Herbert Diess: We are second, yeah, worldwide. So Tesla is ahead --

Lesley Stahl: But second by a mile? Or close--

Herbert Diess: Tesla is quite ahead currently, and they're growing fast, I have to admit. He is taking more risks than we can. He's now building a plant in Berlin. It's 200 kilometers--

Lesley Stahl: I saw that--

Herbert Diess: --from our plant.

Herbert Diess: And I think it's very healthy for us, no, to have a new competitor--

Lesley Stahl: You do?

Lesley Stahl: There was criticism from your workers that you're setting him up as the benchmark and talking about it, and they don't like it.

Herbert Diess: Yeah, actually, you're right. They don't like it. (LAUGH)