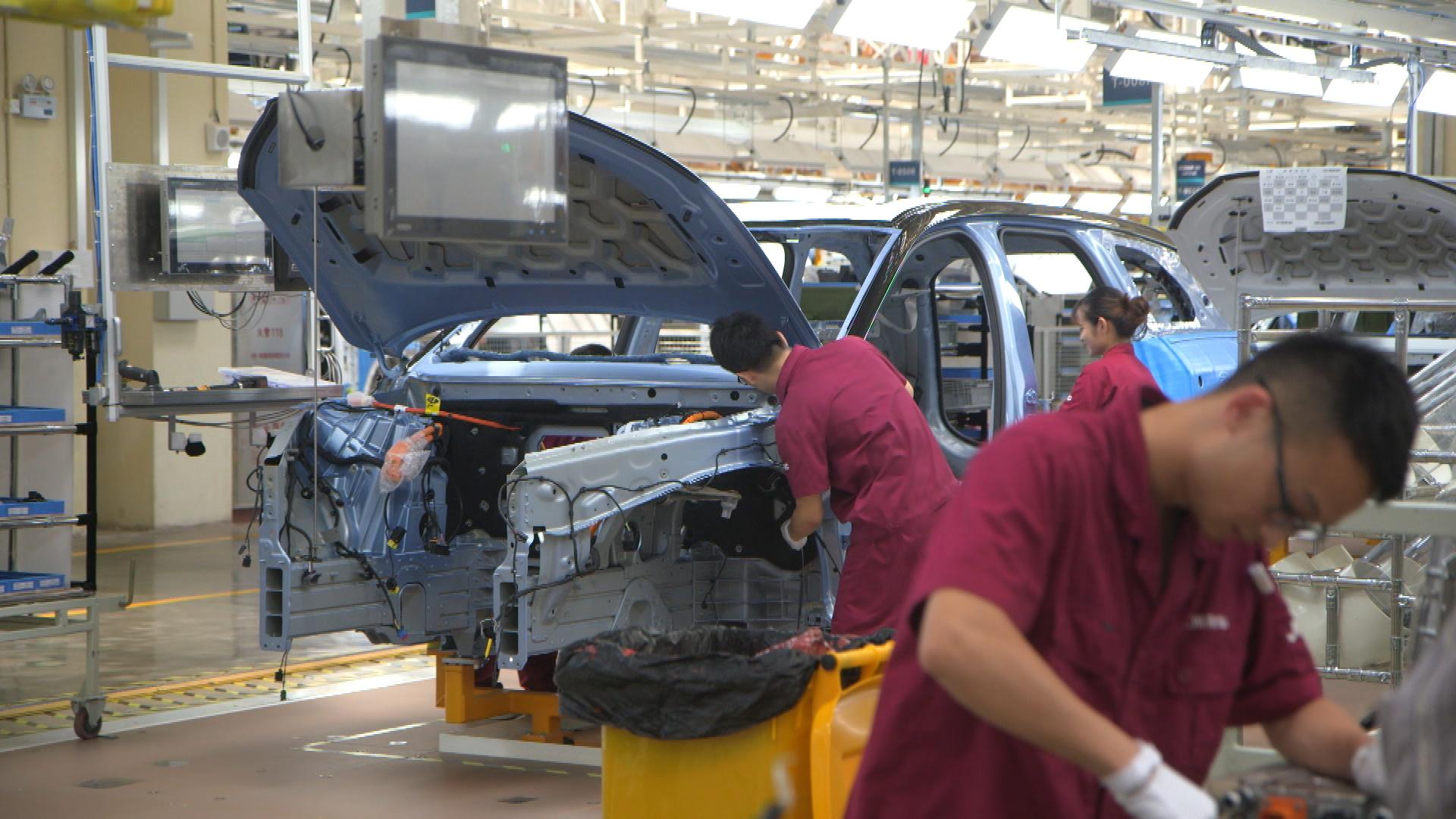 There is perhaps nothing more emblematic of the American century than the automobile. Assembly lines rolled out millions of Fords, Chryslers, Chevys and Buicks and made Motor City-Detroit, Michigan-the capital of the global car industry. But in the race to dominate the auto industry of the 21st century, it is China vying for the pole position. It's Chinese auto-makers building the smart cars of tomorrow. And the energy fueling them is electric.

Today, U.S. automakers are caught between a tariff-fueled trade war and threats of cuts to electric car subsidies by the Trump administration.  At the same time, Beijing is trying to win the race by ensuring the electric vehicles of the future are made in China.

Michael Dunne grew up in Detroit, America's Motor City, then as a graduate student seeking adventure in the late 1980s, he went to Chongqing in Western China.

Michael Dunne: Everyone was poor, wearing greys and blues, riding bicycles. There were no cars.

Michael Dunne: No cars at all.

Dunne has watched China evolve from an isolated socialist state to a controlled capitalist powerhouse. And from a nation of bike riders to car drivers. He's been working as an auto industry consultant in Asia for 30 years, including a stint as a top executive at General Motors.  And now Dunne is witnessing the Chinese government literally electrify its burgeoning auto sector.

Holly Williams: And what else does the government do?

Holly Williams: They're free if you buy an electric vehicle.

The result: an explosion of electric car makers—a hundred or so—eagerly feeding at the government trough. You can buy a Great Wall, or you can "Build Your Dreams"—a carmaker in which American billionaire Warren Buffett was an early investor.

The latest entrant to the crowded Chinese auto market is Nio.

Nio's founder is William Li. A 44-year-old billionaire entrepreneur, who we met last year in Beijing.

Holly Williams: It's sort of similar to a Tesla.

And the similarity to a Tesla is no coincidence. Nio's ES8 is competing with American-made Tesla for wealthy, status-conscious, Chinese. Their conspicuous consumption has made China one of the biggest markets for luxury goods in the world, with no import costs, at $60,000, the Nio is about half the price of a Tesla.

Holly Williams: I heard you were the one to call this the Tesla Killer?

Holly Williams: Maybe it was you.

Holly Williams: Should we take it for a spin?

Holly Williams: What is the acceleration like on this?

And about 220 miles on a full charge.

Plus the car has a built-in personal assistant called "Nomi."

Holly Williams: Can we try Nomi?

Who follows voice commands, as long as you speak Chinese.

Holly Williams: She understands me.

Nomi is an avatar of artificial intelligence. She'll entertain you with a music playlist, adjust the temperature or snap a selfie on command. This is Chinese innovation--a great leap forward from China's communist past.

Holly Williams: What would Chairman Mao have made of a capitalist like you (LAUGHTER)?

Li told us Chairman Mao would have said, "you're doing a good job."

Holly Williams: Really? He was a Communist.  He hated capitalists like you!

"We are trying to make a better world," Li said.

In Chinese,  the slogan of Li's car company is "blue sky coming." That dovetails nicely with one of the reasons the Chinese government is pushing electric vehicles, as a way to reduce the country's choking air pollution.

Holly Williams: You've been called the Elon Musk of China. Is that fair?

Holly Williams: I've been speaking to quite a lot of Chinese since I got here. And they say they really like Teslas.

Holly Williams: How are you gonna compete with that?

Li said it's like the clothes fashion models wear on the catwalk.

"The clothes may be beautiful," he explained, "but you can't wear them everyday."

Holly Williams: So the Tesla is the super-model and you're the girl next door?

Holly Williams: Are they trying to knock Tesla out of China and-- and take on Tesla perhaps globally?

Michael Dunne: There's plenty of market here to allow Tesla to play and Nio to play. What Nio needs to do is establish credibility with consumers and say, "We're legit. We're-- a really good car."

Holly Williams: This is the race car?

A Nio team has competed on the Formula E circuit for two seasons, including this race in Brooklyn, New York. Proof that electric cars are catching up with gas engines in power and speed.

But Nios are really designed for tech-savvy Chinese owners who link to their cars with a mobile app. Tap on a screen for repairs or maintenance. Tap to order a mobile charging van for a quick power boost.

Tap again to visit a swap station, where a depleted battery can be replaced in three minutes by robot mechanics.

It's the kind of futuristic scene that William Li could only dream of as a child.

Holly Williams: And did anyone in your village have a car?

Ironically, the founder of this high-tech electric car company grew up in a farming village with no electricity.

Holly Williams: So you learned about business, raising cows with your grandfather.

Holly Williams: And what did you learn?

Li explained that when you're doing business, "Honesty is very important."

Li has founded or backed about 40 start-ups including an online auto marketplace and a bike sharing company. His estimated net worth is $1.2 billion and Li has plowed $150 million of his own money into Nio.

Holly Williams: Americans have been quite slow to adopt electric cars.

Holly Williams: Is it different here in China?

"it will definitely be fast," Li told us, because the Chinese government is pushing electric cars.

In Shanghai, China has built the largest EV database in the world.

Holly Williams: This is a map of all the electric cars in Shanghai?

Ding Xiaohua is deputy manager of the Shanghai Electric Vehicle Data Center, which collects millions of bits of information every day on nearly 200,000 electric cars on this city's streets.

Ding Xiaohua: So this is only Tesla brands.

Holly Williams: These are all Teslas?

Inside every electric vehicle in the city is a black box, automatically transmitting data to the center every 30 seconds.

Ding Xiaohua: For example, the speeds, the mileage, the battery temperature.

Holly Williams: And does that help the government plan for the future?

There is nothing like this in the U.S. or anywhere else. China is paving the way for the electric cars of the 21st century.

Most of the country's hundred or so EV start-ups will be killed off by the competition. But William Li thinks Nio will survive and points out his company met its modest goal of delivering 10,000 cars by last year.

Holly Williams: Why are the numbers so small at the moment?

"There are always problems and delays when a company ramps up production of something new," Li told us. And Nio's cars, he added, are all made-to-order.

We visited Nio's production line where the made-to-order cars are assembled in a spotless, automated, high-tech factory dominated by a corps of whirring robots.

And with China's massive manufacturing machine behind it, Nio may be able to scale up faster than its foreign competitors.

At the company's research and development outpost in San Jose, California, Padma Warrior—Nio's CEO in the United States until last December—predicted its cars will someday be on American roads—but she was cagey about when.

Holly Williams: What will it mean to American consumers and American drivers you hope?

Padma Warrior: I would hope consumers will look at it as the future.

Nio is one of nine Chinese electric vehicle—or EV—companies to set up shop on the West Coast where they can entice the world's best engineers, programmers and software developers. Nio has hired more than 600 of them.

Padma Warrior: We have people here that have worked at—at Google, at Apple, at Cisco, at—at Tesla, you name it.

Holly Williams: Think some people might see that as a transfer of American technology to a Chinese company.

Padma Warrior: I don't see it that way. I think I see it more as, where is the biggest market for EVs, right? And where is the biggest problem with respect to pollution? Clearly, that's China. So I look at it as taking the best of the talent pool that's available and changing the world for the better.

This year, the Chinese government will require all global automakers in the country to make ten percent of their vehicles electric. American automakers are already investing billions in electric vehicle technology. But unlike Chinese companies, they don't have the government trying to fix the race.

Michael Dunne: The size of the market alone makes China an irresistible place to be for any global automaker. If you're not in China, you're not playing. So China says, "Hmm, how badly do you need our market? All right. Very g-- you're welcome to sell as many cars as you want, provided that you also abide by our new rules with regards to electric vehicles."

Holly Williams: Has America already ceded leadership  in this industry--

Michael Dunne: No. Not too late. It's so early. China's been making electric vehicles three years, four years.

Holly Williams: When will it be too late?

Michael Dunne: If we wait to 2025, China will be making 5 million a year, and if we're still making a half a million, oh, now all of the technology and design engineering is concentrated in China. How do you catch up with that?