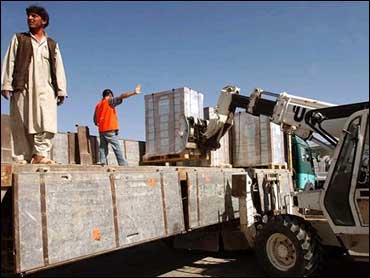 Thousands of rockets, mortars and anti-aircraft ammunition have been seized in central Afghanistan from the biggest cache of militant weapons discovered in months, a government spokesman said Sunday.

The raid in Ghazni province's Khogyani district on Saturday netted some 2,000 surface-to-surface rockets, 3,000 mortars, 500 artillery shells and 100 boxes of anti-aircraft bullets, he said.

"The enemy planned to use them to sabotage the elections," Azimi said. "This was a very important operation to prevent the killing of civilians."

He declined to give any other details about the find, including whether the Taliban were suspected to have stockpiled the cache or whether anyone had been arrested.

Afghan officials have warned that the Taliban and al Qaeda have launched a joint campaign to disrupt the September elections--the next key step toward democracy after a quarter century of war.

Since March, a major upsurge in fighting has left more than 800 people dead, more than half of them suspected insurgents, according to U.S. and Afghan officials.