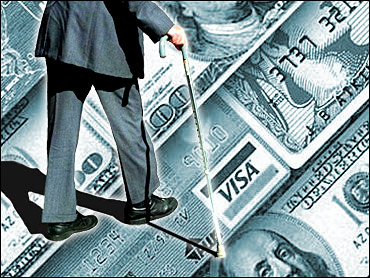 The Early Show financial adviser Ray Martin offers suggestions on how deal with debt issues and how to avoid them before it is too late.

His wife's health forced her to retire early. Ted Martin took early retirement to care for her, and the value of their pensions was cut. Their dreams were forever changed.

He says, "We were tennis buffs and we wanted to travel and see the matches all over the world - that's something we never did."

John Rother, director of Policy and Strategy for AARP, says, "Attitudes toward debt are changing."

His job is seeking to enhance the quality of life for people over the age of 50. He notes, "The older generation certainly had an aversion to debt, but didn't have very much in the way of means to really save for themselves. As the boomer generation comes up, they're better off, they have the means to save, but are more likely to use debt as a financial tool and be comfortable with it."

Recent studies have shown people aged 65 and over are living more dangerously. Bankruptcies have increased faster among seniors than any other group.

With freer-spending baby boomers nearing retirement age, it would appear we are in for trouble.

"We are," says Rother. "We advise people, if possible, to pay down their debt; pay off their credit card debt."

With help from a bankruptcy attorney, Ted Martin paid his debt down to $127,000 before the State of New York advised him to seek out a credit counseling service. It's not what he expected retirement to be about.

In addition to everyday living expenses and thousands in medical costs, Ted Martin has paid at least $2,000 per month for nearly three years to reduce his credit card debt.

The bumpy road Ted Martin has traveled taught him some special lessons.

"Without this woman, I never would have made it to this point in my life," he says, leaning over to give wife Tony a kiss. "I've grown to love my wife and cherish her company much more than I ever thought about. So, in effect, tragedy has been a savior to us where it's brought us closer."

If you're always hearing how important it is to pay off credit card debt, it is because it's a very expensive way to borrow money. In Ted Martin's case, which was (and is) extreme, interest rates on his cards ran more than 20 percent. He said he felt like he was borrowing money from a loan-shark, paying off interest and never paying off the principal - a vicious cycle.

Not only are seniors declaring for bankruptcy at an alarming rate. The baby boomers are nearing retirement age and will soon be seniors. And they become used to carrying even higher amounts of debt on their credit cards.

A third of those retired today rely on Social Security for 90 percent of their retirement income. That's a very serious problem.

What's driving them into the problem of greater credit card debt is going into retirement on a fixed income in a world of rising expenses and with little or no savings to fall back on.

When you have pensions that don't go up; Social Security that's increased only by 1.5 percent; medical costs that go up 15 to 20 percent per year; property taxes that go up 10 percent; and there are no savings for an unforeseen expense, what do you turn to? Credit cards.

So where can seniors go for help to deal with the problem?

And if you find yourself in the same situation as the Martins, there are many places you can turn for help. There are attorneys who deal especially with the elderly. Contact The National Association Of Elder Law Attorneys (NAELA). And community and nursing home Medicaid is available to help with medical costs.

The lesson for people nearing retirement is to limit the use of high-interest-rate credit cards. They're an easy way to get fast money. But if you keep a balance on those cards, it's a very expensive way to borrow. Make sure you pay down your debt, especially the credit card debt. Also, you need to increase your savings until it hurts. Be willing to sacrifice something in order to save a little bit more money. And make sure the money you save is channeled into a diversified group of savings and investments.