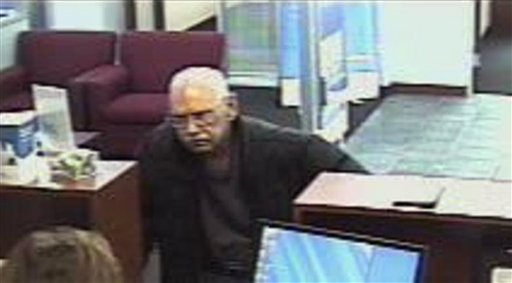 (AP) CHICAGO - After spending most of his adult life behind bars, 73-year-old Walter Unbehaun decided to rob another bank because, well, he wanted to get caught. He felt more comfortable in prison, court documents allege, and hoped to spend his final years there.

So the balding, gray-haired South Carolina man leaned on a cane as he walked into a bank in suburban Chicago over the weekend and used a novel stickup line: He said he had just six months to live, so he had nothing left to lose, according to a federal complaint citing his post-arrest interrogation.

Unbehaun also allegedly lifted his coat to show a teller a silver revolver shoved into his waistband.

Investigators say Unbehaun, of Rock Hill, S.C., walked out of the Harris Bank in Niles, Ill. on Saturday with $4,178 in his pockets. He wore no disguises, so law enforcement quickly tracked him down using surveillance-camera photos of him holding up the bank, the complaint said.

When authorities stopped Unbehaun on Sunday outside a motel room where he was staying, he immediately threw down his cane and surrendered, saying he knew they were there because he robbed a bank the day before, according to the complaint filed in U.S. District Court in Chicago.

Unbehaun told investigators hours after his arrest that he had spent most of his adult life in prison and "felt more comfortable in prison than out."

"He wanted to do something that would guarantee that he would spend the rest of his life in prison, and he knew that robbing a bank with a loaded gun would accomplish that," according to the complaint, signed by FBI agent Chad Piontek.

Unbehaun's most recent stint behind bars ended in 2011, when he was released after serving 10 years for a 1998 bank robbery. His Illinois record alone includes multiple other felonies dating back decades.

Unbehaun made an initial court appearance Monday in Chicago and was ordered to remain in jail pending further court procedures. No additional hearing dates were set.

If he is eventually convicted on the new bank robbery charge, he could be sent to prison for up to 20 years.