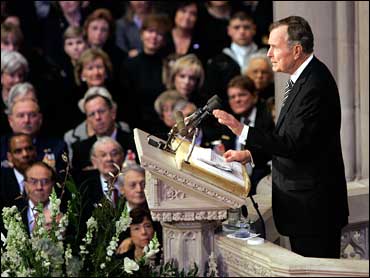 The elder President George Bush will not be attending Sen. Edward Kennedy's funeral.

A spokesman for Mr. Bush said Friday that he and his wife, Barbara, decided not to attend Kennedy's funeral after learning their son, former President George W. Bush, would attend.

The senior Bush's staff is unsure of how the word got out that he'd be at the funeral because, in the words of a source, "that was never the case." Asked if the senior Bush's health is OK, the source said, "rest assured all is well," reports CBS News White House correspondent Peter Maer. Following their long tradition, George and Barbara Bush are spending the summer at Kennebunkport, Maine.

Mr. Bush released a condolence statement on behalf of him and his son immediately after Kennedy's death. It was part of a stream of fond remembrances issued by Republicans.

The other remaining former presidents - Democrats Jimmy Carter and Bill Clinton - will join the younger Mr. Bush at the service. President Obama will give the eulogy.