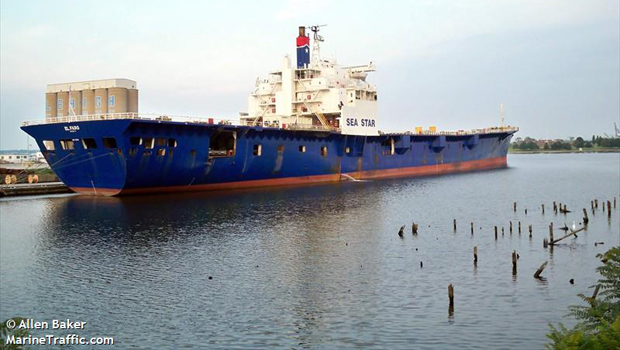 JACKSONVILLE, Fla. -- The captain of the 790-foot El Faro planned to bypass Hurricane Joaquin, but some kind of mechanical failure left the U.S. container ship with 33 people aboard helplessly - and tragically - adrift in the path of the powerful storm, the vessel's owners say.

On Monday, four days after the ship vanished, the Coast Guard concluded it sank near the Bahamas in about 15,000 feet of water. One unidentified body in a survival suit was spotted, and the search went on for any trace of the other crew members.

Survival suits help mariners float and stay warm. But even with the water temperature at 85 degrees, hypothermia can set in quickly, Coast Guard Capt. Mark Fedor said. He noted that the hurricane had winds of about 140 mph and waves topping 50 feet.

"These are trained mariners. They know how to abandon ship," Fedor said. But "those are challenging conditions to survive."

The ship, carrying cars and other products, had 28 crew members from the U.S. and five from Poland.

Coast Guard and Navy planes, helicopters, cutters and tugboats searched across a 300-square-mile expanse of Atlantic Ocean near Crooked Island in the Bahamas, where the ship was last heard from while on its way from Jacksonville to Puerto Rico.

A heavily damaged lifeboat from the El Faro was discovered, no one aboard, Fedor said. The ship had two lifeboats capable of holding 43 people each.

"We are still looking for survivors or any sign of life," he said.

Phil Greene, president and CEO of ship owner Tote Services Inc., said the captain had a plan to sail ahead of the hurricane with room to spare.

Greene said the captain, identified earlier this week by his family as Michael Davidson, had conferred with the El Faro's sister ship - which was returning to Jacksonville along a similar route - and determined the weather was good enough to go forward.

"Regrettably he suffered a mechanical problem with his main propulsion system, which left him in the path of the storm," Greene said. "We do not know when his engine problems began to occur, nor the reasons for his engine problems."

The last message from the ship came Thursday morning, when the captain reported the El Faro was listing slightly at 15 degrees in strong winds and heavy seas. Some water had entered through a hatch that popped open.

The captain, who has 20 years' experience on cargo ships, calmly told company officials the crew was removing the water.

The Coast Guard was unable to fly into the ship's last known position until Sunday, because of the fierce hurricane winds.

Steven Werse, a ship captain with 31 years' experience on the seas, said merchant vessels have access to up-to-date weather forecasting and technology that allow them to avoid most storms.

If the El Faro had not lost engine power, he added, it would probably still have been powerful enough to make it through Joaquin.

Without power, it was a sitting duck.

"The ship really is at the mercy of the sea. You have no means of maneuvering the ship. You would be rolling with the seas," said Werse, secretary-treasurer of the Master Mates and Pilots Union in Linthicum Heights, Maryland. The union has no connection to the El Faro or its crew.

Abandoning ship would be difficult, he added, because the lifeboats might not be accessible on a listing ship and life rafts could be torn apart or blown away.

"Sometimes circumstances overwhelm you. You can do all the planning you want," Werse said.

Bernard Ferguson, a commercial fisherman who was at his home on Crooked Island during the hurricane, said it must have been a nightmare for the crew.

"It's impossible for any kind of vessel to take that kind of beating for that length of time, maybe an hour or two, yes," Ferguson said. "But taking 36 hours of beating, there's no way."

Anxious family members, gathered at the Seafarers union hall in Jacksonville, tried to remain optimistic, but some wondered why the ship sailed into such a potent storm.

"What we've all questioned from the very start is why the captain would take them through a hurricane of this magnitude, or any hurricane," said Barry Young, uncle of crew member Shaun Riviera.

Terrence Meadows, a junior engineer and union member, said the captain and company made a poor decision to go to sea. He added there is often pressure for captains to stay on schedule.

"I personally believe that should not have happened," Meadows said. "We are the most important cargo on that vessel, not the cars" and other cargo.

Fedor said the National Transportation Safety Board and Coast Guard will investigate the sinking. The Coast Guard did not immediately release safety records requested by The Associated Press for the ship and its company.