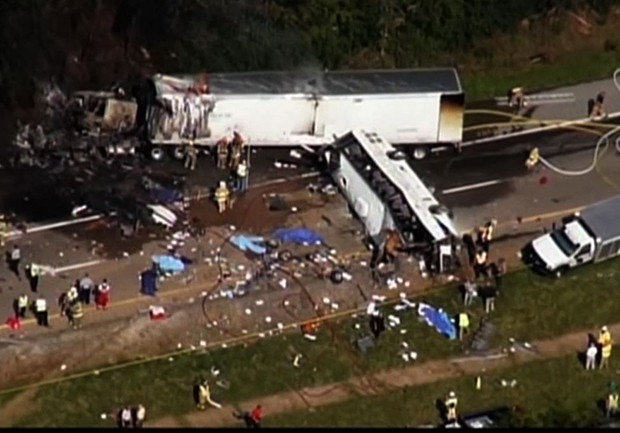 DANDRIDGE, Tenn. A bus taking a church group home to North Carolina blew a tire, veered across a highway median and crashed into a sport utility vehicle and tractor-trailer Wednesday in a fiery wreck that killed eight people, authorities said.

Fourteen other people were hurt in the accident in northeastern Tennessee, including eight who were in critical condition. The bus was carrying members of the Front Street Baptist Church in Statesville, N.C., which is about 140 miles east of the crash site.

The group of seniors, known as Young at Heart, had been to the 17th annual Fall Jubilee in Gatlinburg, Tenn., a three-day event featuring gospel singers and speakers.

Inside the Statesville church, people were crying and hugging each other. One woman whispered "It's going to be all right" while hugging another woman. A service was scheduled for Wednesday night.

George Stadfeld, who has been a member of the church for eight years, said he knew everyone on the bus.

"We're all shaken," he said. "As bad as it is, they're all Christians and I know where they're at. I'll join them later."

The Fall Jubilee website described the gathering as "three days of singing, laughing and preaching" for "mature and senior believers."

After the accident, a banner was posted on top of the website saying, "Our thoughts are with our friends at Front Street Baptist Church in their tragic loss. ... all the Jubilee team have you in our prayers."

Dionne Stutts, wife of Front Street Baptist senior pastor Tim Stutts, said her husband and another pastor from the church were en route to the wreck.

"They had been there and they were on their way home today," she said. "We are devastated and just ask for the people to be praying."

Authorities said the chartered bus crossed the median about 2 p.m., clipped the oncoming SUV and slammed into the tractor-trailer, which burst into flames.

Several hours after the crash, clouds of smoke still rose from the tractor-trailer and tree branches that lined the highway were charred.

The bus was on its side next to the tractor-trailer, lying across two lanes of traffic and extending partially into the median. Debris littered the interstate.

The SUV was about 50 yards away from the other vehicles. It was still upright, but the back half had been completely ripped off.

The interstate was completely shut down in both directions, and the scene was eerily quiet, despite the presence of many emergency workers. The loudest noise came from helicopters flying overhead.

Susan Wyatt, a spokeswoman for the University of Tennessee Medical Center, said 12 people had been brought to the hospital, four by helicopter, and two more were still en route four hours after the accident.

Wyatt said in addition to those in critical condition, two were in serious condition and two were stable.

State Department of Safety and Homeland Security spokeswoman Dalya Qualls said in an email 18 people were on the bus and six of them were killed. One person among the three in the SUV was killed and the tractor-trailer driver also died.

None of the victims had been identified.

At the church, Jerry Wright said his 73-year-old brother, John, and his wife were on the bus, and he thinks his brother may have been driving the church bus because he had done it in the past.

Brady Johnson, superintendent of the Iredell County-Statesville City Schools, said a lot of people who work for the school system are church members. Johnson said he knew people on the bus and they were awaiting word on the conditions.

Now, the school system is offering a high school auditorium as a site for a memorial.

"It hits the community as a whole when tragedy strikes. The whole community comes together," he said.