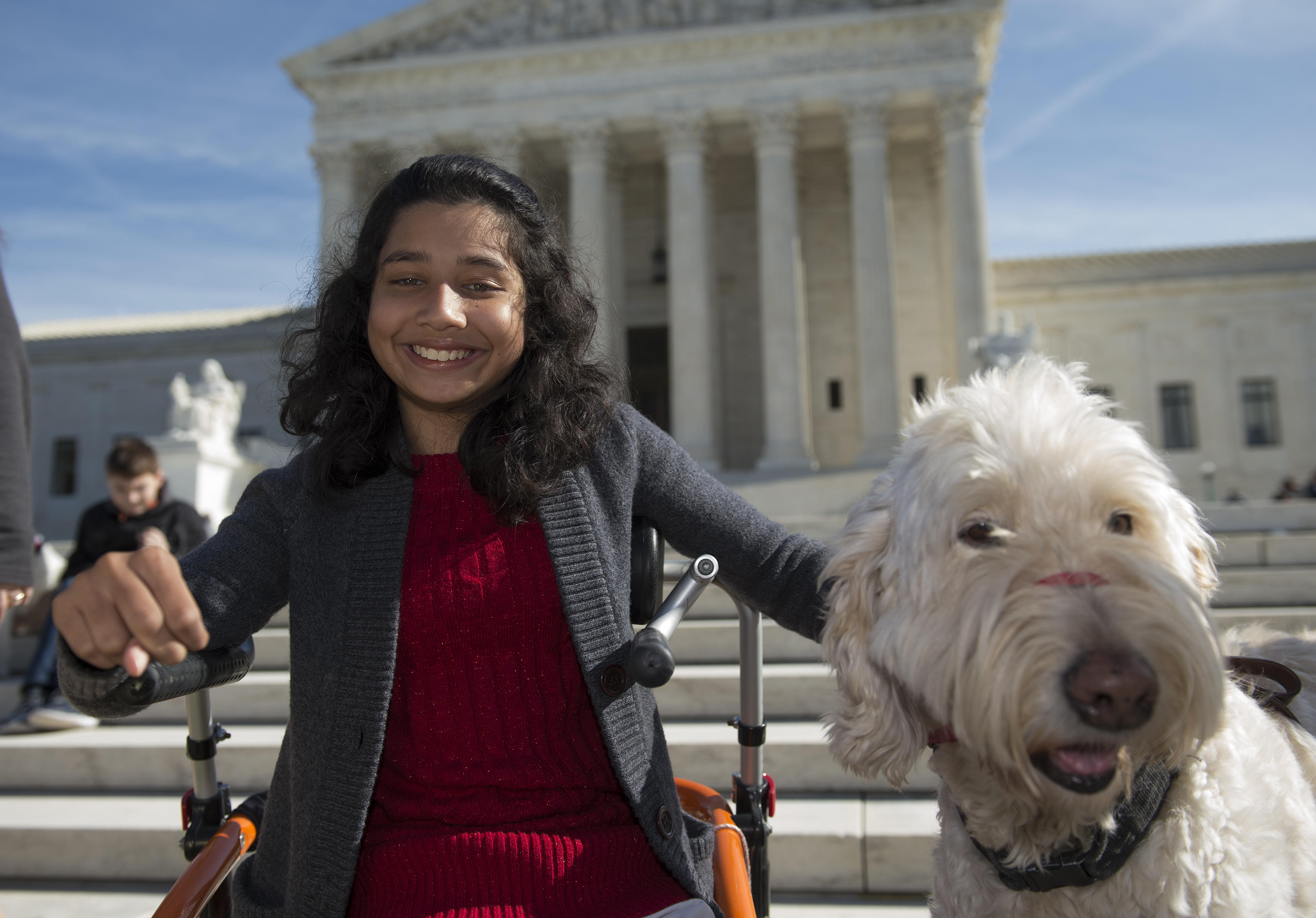 WASHINGTON -- The Supreme Court on Wednesday sided with a 13-year-old Michigan girl with cerebral palsy who spent years battling school officials for the right to bring her service dog -- a goldendoodle named Wonder -- to class.

The justices ruled unanimously that federal disability laws might allow Ehlena Fry to pursue her case in court without first having to wade through a lengthy administrative process.

The ruling is a win for advocacy groups that want to make it easier for disabled students to protect their rights under the Americans with Disabilities Act. School officials had argued that administrative remedies are an easier and less costly way to resolve educational disputes.

Writing for the court, Justice Elena Kagan said exhausting the administrative process is not always required in such cases. But she said further fact-finding is needed to decide whether Fry can pursue her case in court.

Lower courts had ruled against Fry, saying she first had to try informally resolving her dispute with the school district.

“We’re thrilled that the Supreme Court has torn down unfair barriers faced by students who seek to vindicate their rights under the Americans with Disabilities Act,” said Michael Steinberg, legal director of the American Civil Liberties Union in Michigan. The ACLU represented Fry throughout her legal proceedings.

Fry’s family sought to use Wonder when Ehlena started kindergarten and suffered from severe mobility problems. Wonder was specially trained to help open doors, pick up items and give Ehlena a measure of independence.

But her school district 75 miles southwest of Detroit initially said Wonder could not accompany her and insisted adult aides could help Ehlena.

School officials later relented a bit, but placed so many restrictions on the dog that Ehlena’s parents decided to home-school her. She later transferred to a different public school that welcomed Wonder.

At issue is the interplay of two federal disability laws. The school district said it could bar the dog under the Individuals with Disabilities Education Act, which allows a teacher’s aide to assist students instead. That law requires families that contest school decisions to first go through administrative proceedings.

But the family said it could sue for damages under a different law, the Americans with Disabilities Act, because the district refused to accommodate Wonder over a two-and-a-half year period.

In her opinion for the court, Kagan offered two examples. In one, a child who uses a wheelchair sues a school for discrimination because the building lacks access ramps. That case, she said, could just as easily be brought against a library or theater and hinges on equality of access to public facilities, not whether a school’s special education program is adequate.

In her other example, Kagan described a student with a learning disability who sues the school for failing to provide remedial math tutoring. She said the essence of that lawsuit is whether the school offers an adequate education.

Kagan said nothing in the Frys’ lawsuit suggests a focus on the adequacy of her education. Rather, the family is asserting Ehlena’s right to bring a service dog to school regardless of alternatives the school district provided.

But Kagan did not completely eliminate the possibility of a different outcome. She said the lower court must look more closely at the facts to decide.

Fry’s mobility and independence has improved since she was younger and she now attends school without Wonder.

Naomi Gittins, managing director of legal advocacy at National School Boards Association, said the court’s ruling may cause more confusion than help for lower courts trying to apply the law. Her group backed the Michigan school district in the case.

“Going right to court is never a good approach when you’re talking about educational issues,” she said. “It could result in court cases that run up bills rather than a parent talking about this with the school.”