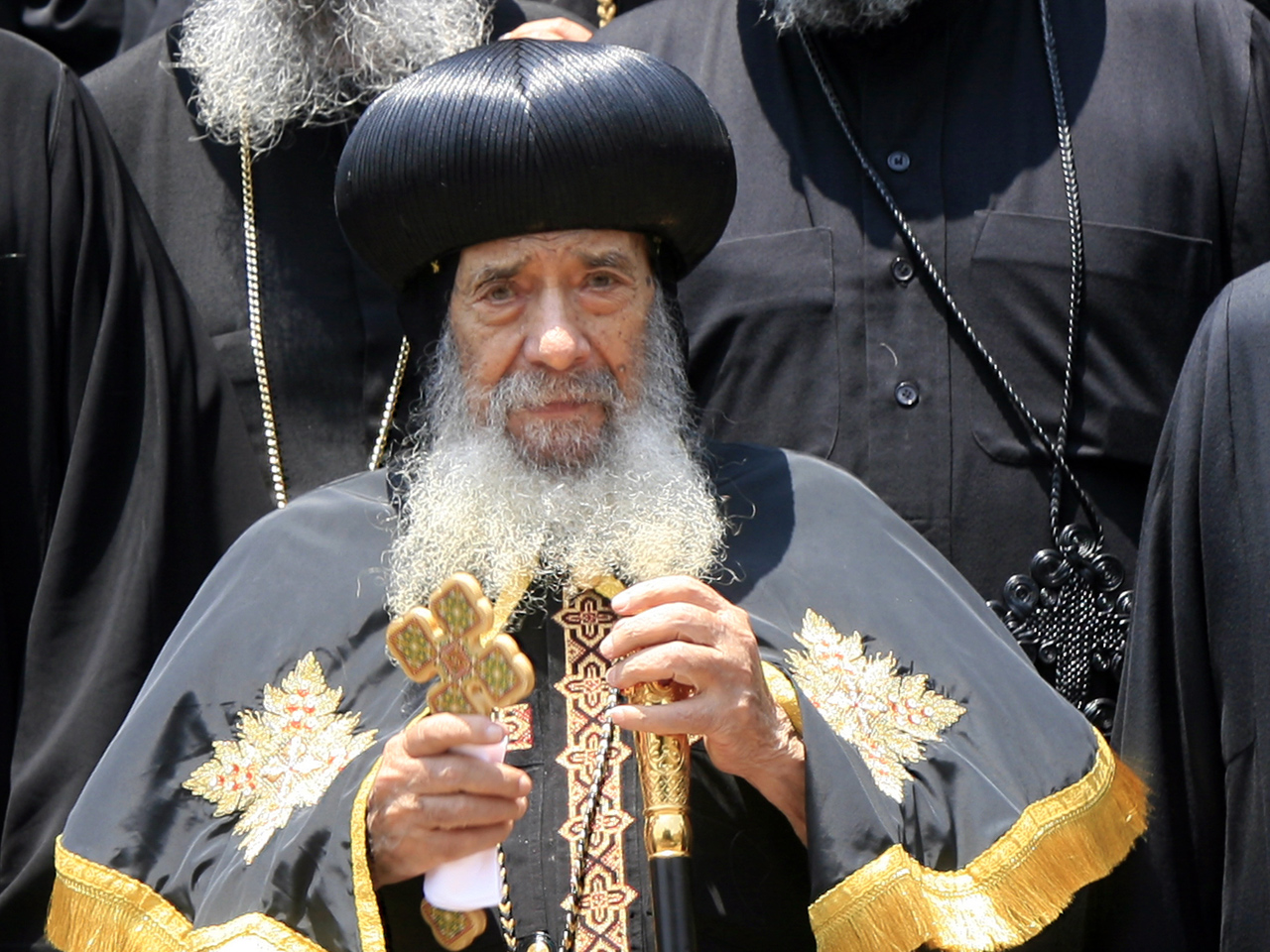 CAIRO, Egypt - Pope Shenouda III, the patriarch of the Coptic Orthodox Church who led Egypt's Christian minority for 40 years during a time of increasing tensions with Muslims, died Saturday. He was 88.

His death comes as the country's estimated 10 million Christians are feeling more vulnerable than ever amid the rise of Islamic movements to political power after the toppling a year ago of President Hosni Mubarak. The months since have seen a string of attacks on the community, heightened anti-Christian rhetoric by ultraconservatives known as Salafis and fears that coming goverments will try to impose strict versions of Islamic law.

Tens of thousands of Christians packed into the main Coptic cathedral in Cairo on Saturday evening hoping to see his body. Women in black wept and screamed. Some, unable to get into the overcrowded building, massed outside, raising their hands in prayer.

"He left us in a very hard time. Look at the country and what's happening now," said Mahrous Munis, a Christian IT worker in his 30s who was among the crowds. "Copts are in a worse situation than before. God be with us."

Munis' friend, Sherif Sabry, interrupted. "He was our rock. God help us find someone who can fill his place."

An archbishop later announced to the crowd that the funeral would be held in three days, and in the meantime Shenouda's body would be put on display in the cathedral, sitting in the Mar Morqos — or St. Mark — throne from which the pope in his elaborate regalia traditionally oversaw services.

Shenouda died in his residence at the cathedral, and the state news agency MENA said he had been battling liver and lung problems for several years. Yasser Ghobrial, a physician who treated Shenouda at a Cairo hospital in 2007, said he suffered from prostate cancer that spread to his colon and lungs.

U.S. President Barack Obama paid tribute to Shenouda as "an advocate for tolerance and religious dialogue."

"We will remember Pope Shenouda III as a man of deep faith, a leader of a great faith, and an advocate for unity and reconciliation," Obama said in a statement issued by the White House. "His commitment to Egypt's national unity is also a testament to what can be accomplished when people of all religions and creeds work together."

"Baba Shenouda," as he was known to his followers, headed one of the most ancient churches in the world. The Coptic Church traces its founding to St. Mark, who is said to have brought Christianity to Egypt in the 1st Century.

For Egypt's Christians, he was a charismatic leader, known for his sense of humor — his smiling portrait was hung in many Coptic homes and shops — and a deeply conservative religious thinker who resisted calls by liberals for reform.

Above all, many Copts saw him as the guardian of their community living amid a Muslim majority in this country of more than 80 million people. Christians have long complained of being treated as second-class citizens, saying they face discrimination and that police generally fail to prosecute those behind anti-Christian attacks.

Shenouda's method was to work behind the scenes. He sought to contain Christians' anger and gave strong support to Mubarak's government, while avoiding pressing Coptic demands too vocally in public to prevent a backlash from Muslim conservatives. In return, Mubarak's regime allowed the Church wide powers among the Christian community.

In the past year, young and liberal Christians grew increasingly overt in their criticism of his approach, saying it brought little success in stemming violence or discrimination. Moreover, they argued, the Church's domination over Christians' lives further ghettoized them, making them a sect first, Egyptian citizens second.

"This was the mistake of Baba Shenouda and his predecessor. The state wanted to deal with Christians through one person," said prominent Christian columnist, Karima Kamal.

"We want the state to deal with Christians as citizens and for the Church to step aside," she said. "Christians are increasingly dealt with just as a sect."

Shenouda had one significant clash with the government, in 1981 when he accused then-President Anwar Sadat of failing to rein in Islamic militants. Sadat said Shenouda was fomenting sectarianism and sent him into internal exile in the desert monastery of Wadi Natrun, north of Cairo. Sadat was assassinated later that year by militants. Mubarak ended Shenouda's exile in 1985.

The incident illustrated the bind of Egypt's Christians. When they press too hard for more influence, some Muslims accuse them of causing sectarian splits. Many Copts saw Mubarak as their best protection against Islamic fundamentalists — but at the same time, his government often made concessions to conservative Muslims.

After Mubarak's fall, ultraconservative Salafis grew older and more vocal, accusing Christians of seeking to convert Muslim women or even take over the country. Several churches were attacked by mobs. Christian anger was further stoked when troops harshly put down a Christian protest in Cairo, killing 27 people.

In an unprecedented move aimed at showing unity, leaders from the Muslim Brotherhood along with top generals from the ruling military joined Shenouda for services for Orthodox Christmas in January at the Cairo cathedral.

"For the first time in the history of the cathedral, it is packed with all types of Islamist leaders in Egypt," Shenouda told the gathering. "They all agree ... on the stability of this country and on loving it, working for it and working with the Copts as one hand for Egypt's sake."

During the first post-Mubarak parliament elections late last year, the Church discreetly urged followers to back a liberal, secular-minded political bloc, an unusual political intervention aimed at balancing religious parties. Nevertheless, the Muslim Brotherhood won nearly half the seats in parliament and now dominate the political scene. Salafis won another fifth of the seats.

The Brotherhood's political party offered its condolences "to the Egyptian people and its Christian brothers."

Parliament speaker Saad el-Katatny, a Brotherhood member, praised the pope in an evening session, calling him a "man respected among Coptic Christians and Muslims" for his love of Egypt and his opposition to Israel's annexation of Jerusalem. Under a long-standing order, Shenouda barred his followers from pilgrimage to Jerusalem as a protest of Israel's hold on the city.

Under Church law, the process of choosing Shenouda's successor can take up to three months, though an interim leader will be picked within a week. A synod of archbishops, bishops and lay leaders will then form a committee to come up with three candidates. The names are then put in a box and a blindfolded acolyte picks one — a step meant to be guided by the will of God.

Two leading contenders are close associates of Shenouda. Archbishop Bishoy, head of the Holy Congregation, the main clerical leadership body, is seen as the more conservative figure; Archbishop Johannes, the pope's secretary, is younger — in his 50s — and seen as having a wider appeal among youth.

Shenouda was born Nazeer Gayed on Aug. 3, 1923, in the southern city of Assiut. After entering the priesthood, he became an activist in the Sunday School movement, which was launched to revive Christian religious education.

At the age of 31, Gayed became a monk, taking the name Antonious El-Syriani and spending six years in the monastery of St. Anthony. After the death of Pope Cyrilos VI, he was elected to the papacy in 1971 and took the name Shenouda.

During the 1990s, Islamic militants launched a campaign of violence, centered in southern Egypt, targeting foreign tourists, police and Christians until they were put down by a heavy crackdown. Muslim-Christian violence has flared repeatedly in the past decade, mainly in towns of the south and in the Mediterranean coastal city of Alexandria. Sometimes it was sparked by local disputes that took a sectarian tone, sometimes by disputes over the building of churches. The most startling attack came on New Year's 2011, when suicide bombers attacked an Alexandria church, killing 21 worshippers.

At the same time, Christian emigration has increased tremendously. Coptic immigrants in the United States, Canada, and Australia number an estimated 1.5 million, according to the pope's official Web site.

Throughout, Shenouda largely worked to contain anger among Copts.

But in one 2004 incident, he stepped aside to allow Coptic protests, sparked when Wafa Constantine, the wife of a priest, fled her home to convert to Islam. Many Christians accused police of encouraging or forcing Christians to convert. Amid the protests, Shenouda isolated himself at the Saint Bishoy monastery until the government ensured Constantine returned home. She was later quoted as saying she converted to Islam to divorce her husband, since divorce is banned by the Church.

Shenouda kept a strict line on church doctrine — including the ban on divorce, except in cases of adultery — in the face of calls by secular and liberal Copts for reform, including reducing the role of clergymen in Christians' life.

Archbishop Moussa told mourners at the cathedral that Shenouda would be buried at the Bishoy Monastery.