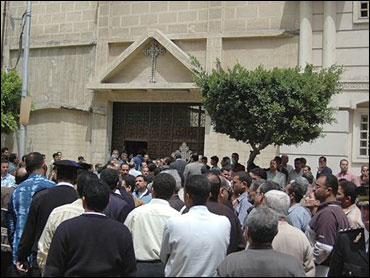 Knife-wielding assailants attacked worshippers at three Coptic churches in the northern Mediterranean city of Alexandria during Mass Friday, killing one person and wounding more than a dozen, police officials said.

Police said they had arrested three men in the attacks. One was said to have attacked two churches; one assaulted a third church; and the other was arrested during a foiled attack on a fourth church.

A police official, speaking on condition of anonymity because he was not authorized to speak to the press, characterized the men as "insane" and said they were carrying tranquilizing medication.

One worshipper, Nushi Atta Girgis, 78, was killed, according to the semiofficial Middle East News Agency.

The agency said three people were injured. Initial police reports said a total of 17 people were injured: 10 at the Saints Church in downtown Alexandria and three at the nearby Mar Girgis Church. Four worshippers were wounded at a church in Abu Qir, a few miles to the east.

Police said a fourth attack was foiled by policemen guarding another church in Egypt's second-largest city.

"They could be Islamic activists. They consider this as jihad," he said of the attackers, who broke through regularly stationed security barriers and police to enter the churches.

But Abdullah Osman, an official with the ruling National Democratic Party, questioned the sanity of the attackers.

The government and church officials were trying to calm the angry crowds who gathered to protest the attacks. Witnesses said clashes erupted between Christians and Muslims in the Sidi Bishr neighborhood, near Saints Church.

"We are trying to calm the situation after many of our youth started protesting," Father Augustinos said. "We are telling them to calm down. It doesn't do any good for the country to make protests. We want to live in peace and tranquility but these are people who had their family members killed or wounded. We are doing our best."

Osman said NDP officials and legislators were also doing what they could to restore calm.

"They went to the churches to explain that the attackers are insane and that the people should not blow things (out of proportion)," he told The Associated Press by telephone from Alexandria.

The attack comes on what is Good Friday to many of the world's Christians. However, Egypt's Copts, and other followers of the Greek Orthodox church, celebrate the holiday a week later.

Coptic Christians account for about 10 percent of Egypt's population of 72 million and generally live in harmony with the Muslim majority, though violence flares occasionally.

Egypt's last sectarian clashes were in Alexandria last October, when Muslims attacked churches and shops over the distribution of a DVD of a play deemed offensive to their religion. Four people were killed in weeklong riots.