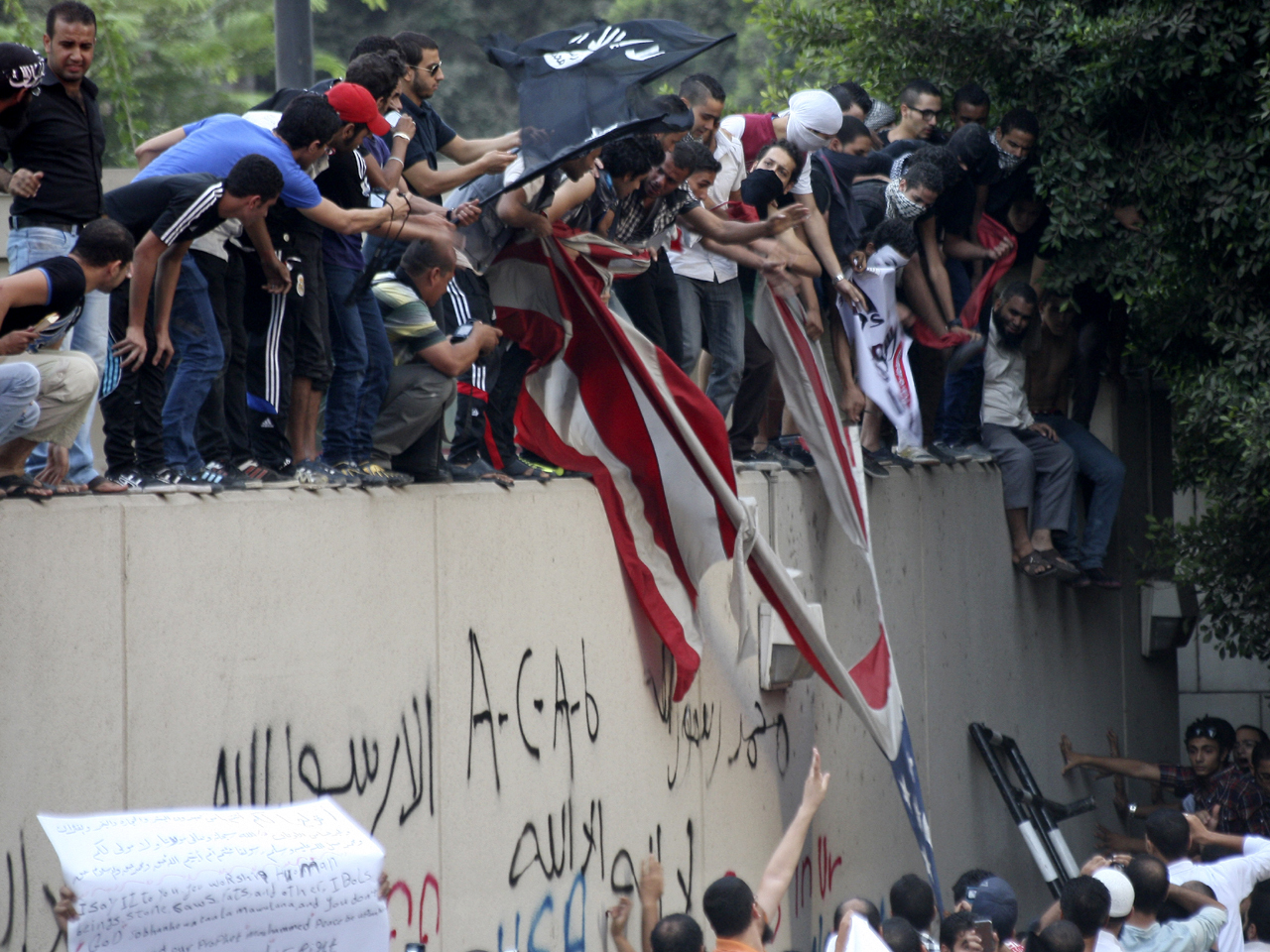 (CBS/AP) CAIRO - Main ultraconservative Islamist protesters climbed the walls of the U.S. Embassy in Egypt's capital Tuesday and brought down the flag, replacing it with a black flag with an Islamic inscription to protest a video attacking Islam's prophet, Muhammad.

Hundreds of protesters marched to the embassy in downtown Cairo, gathering outside its walls and chanting against the movie, which was reportedly produced in the United States.

"Say it, don't fear: Their ambassador must leave," the crowd chanted.

A U.S. Embassy official disputed a report that embassy guards had fired their weapons at the protesters, CBS News' Alex Ortiz reports from Cairo.

Dozens of protesters scaled the embassy walls, went into the courtyard and took down the flag from a pole. They brought it back to the crowd outside, which tried to burn it, but failing that, tore it apart. The protesters on the wall then raised on the flagpole a black flag with the Muslim declaration of faith on it, "There is no god but God and Muhammad is his prophet."

The flag, similar to the banner used by al Qaeda, is commonly used by ultraconservatives around the region. Almost all the embassy staff had left the compound before the protest, and the ambassador was out of town.

The broader issue at play here could be how the ultraconservative Salafists fit into the new political scene, Ortiz reports. After they did so well during the last parliamentary elections, the Muslim Brotherhood engaged them.

However, since several protesters were overheard asking each other, "Where is Morsi?", there was a sense of the political jockeying going on between the two groups.

The streets around the U.S. and British Embassies had been closed to traffic for years, Ortiz reports. Only recently had the security barriers cutting off traffic been removed, and the army and police presence had been reduced, which assisted the demonstrators.

The protest was sparked by outrage over a video being promoted by an extreme anti-Muslim Egyptian Christian campaigner in the U.S., clips of which are available on the social website YouTube and dubbed in Egyptian Arabic. The video depicts Muhammad as a fraud, showing him having sex and calling for massacres. Muslims find it offensive to depict Muhammad in any fashion, much less in an insulting way. The 2005 publication of 12 caricatures in a Danish newspaper triggered riots in many Muslim countries.

By evening, the protest grew with thousands standing outside the embassy, chanting "Islamic, Islamic. The right of our prophet will not die." A group of women in black veils and robes that left only their eyes exposed chanted, "Worshippers of the Cross, leave the Prophet Muhammad alone."

Dozens of riot police lined up along the embassy walls. They did not stop protesters who continued to climb up the wall and stand on it, chanting. But it appeared they were no longer going into the embassy compound.

One young member of the ultraconservative Salafi movement, Abdel-Hamid Ibrahim said, "This is a very simple reaction to harming our prophet."

In Washington, State Department spokeswoman Victoria Nuland said the U.S. was working with Egyptian authorities to try to restore order.

The protest took place on the 11th anniversary of the Sept. 11, 2001, terrorist attacks on the United States, but there was nothing to indicate the demonstration was tied to the anniversary.

Only a few staff members were still inside, as embassy security had sent most staff home early after learning of the upcoming protest, a U.S. official said, speaking on condition of anonymity because he wasn't authorized to speak publicly on the matter.

It was not exactly clear who made the video that angered the protesters.

Morris Sadek, an Egyptian-born Christian in the U.S. known for his anti-Islam views, told The Associated Press from Washington that he was promoting the video on his website and on certain TV stations, which he did not identify.

He said the video "explains the problems of the Copts who suffer from Muslims," which he blamed on the Koran itself.

For several days, Egyptian media have been reporting on the video, playing some excerpts from it and blaming Sadek for it, with ultraconservative clerics going on air to denounce it.

"He is an extremist ... We don't go down this road. He has incited the people (in Egypt) against Copts," he said, speaking from Switzerland. "We refuse any attacks on religions because of a moral position."

But he said he was concerned about the backlash from angry Islamists. "They don't know dialogue and they think that Islam will be offended from a movie."

Several demonstrators interviewed by CBS News' Alex Ortiz seemed to think that infamous Quran-burning Florida Pastor Terry Jones was the source of the film, even though it's apparently not an American production. Of the numerous protesters interviewed by Ortiz, none had even seen the film. They'd just heard about it and turned out en mass, which shows the power of the Egyptian rumor mill.

The embassy is located in a diplomatic area in Garden city, where the British and Italian embassies are located, only a few blocks away from Tahrir Square, the center of last year's uprising that led to the ouster of Hosni Mubarak. The U.S. Embassy is built like a fortress, with a wall several yards high.