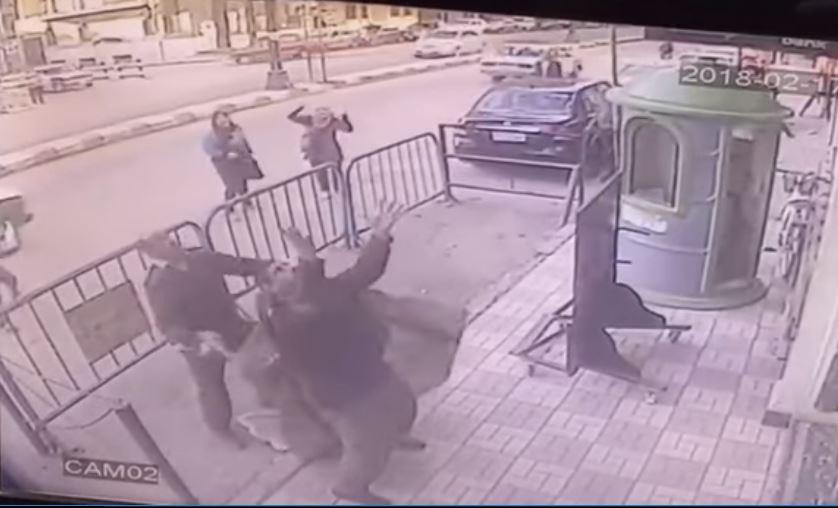 An Egyptian police officer on patrol outside a bank likely saved a young boy's life this week by being in the right place at the right time, and being quick with his hands. Five-year-old Ammar Motaz Abd El-Salam was with his family at a party on Saturday in Asyut, a city on the Nile about 200 miles south of Cairo, when he tumbled from a third-storey window toward the sidewalk below.

Fortunately for Ammar, well-coordinated police officer Kameel Fathy Geed, 45, was on regular patrol outside a bank at street level. Security camera video catches the few moments after the officer, along with two colleagues, notices the boy dangling from the window overhead.

As two of the police try frantically to stretch out a large piece of fabric to use as a net, there is a blur as the boy plummets down into the view of the camera -- and fortunately into the just-outstretched arms of officer Geed.

The video, posted online by Egypt's Ministry of Interior, shows Geed fall backwards under the force of Ammar's landing, but both walked away without any serious injuries.

In a phone interview with an Egyptian TV channel, Ammar's mother said they were at engagement party and her son climbed up onto a small table which toppled. She said because of the crowd, no one at the party noticed.

"I was surprised when they came up and said a child fell from this apartment," the mother told Dream TV.

Ammar's father said this was not the first time their son, whom they said suffers a brain condition, had been narrowly saved from injury in a fall or near-fall.

In video released by the Interior Ministry, the couple are seen sitting in their home with a happy looking Ammar, and extending their thanks to Geed for his fast hands.