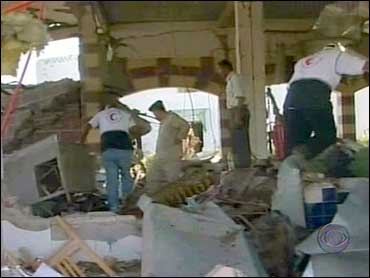 Egypt launched a massive hunt Saturday for terrorists who set off multiple bomb blasts that killed at least 88 in this Red Sea resort packed with European and Arab vacationers. Just days after the latest London strike, the world reeled from yet another attack with possible links to al Qaeda.

Egyptian investigators said they were trying to determine whether foreigners carried out the string of blasts that leveled the reception area of a luxury tourist hotel and ripped apart a coffeehouse crowded with Egyptians at 1:15 a.m. Saturday.

No direct link was seen between the devastating blasts in Sharm and the two rounds of explosions that recently hit London's subway and buses, but together the attacks reinforced a global fear that militants can strike anywhere.

The resort at the southern tip of the Sinai Peninsula has long felt like an oasis of safety, known equally for partying, scuba diving and high-level political summits.

But last October, 34 people were killed in attacks on two other Sinai resorts at Taba and Ras Shitan, about 120 miles north of Sharm el-Sheik.

"The whole world is getting very disturbed. The frequency (of terrorist attacks) seems to be mounting," said Malaysian Prime Minister Abdullah Ahmad Badawi, who chairs the 57-nation Organization of the Islamic Conference.

"Standing together with the rest of the civilized world, we will win the conflict against this global scourge," said White House spokesman Scott McClellan.

There were conflicting claims of responsibility — one from an al Qaeda-linked group, the other from a previously unknown and apparently local group.

At hotels across Sharm el-Sheik late Saturday, lobbies were jammed with tourists with their baggage, eager to leave. At the nearby international airport, foreigners lined up, with hundreds of Italians trying to get flights out. Some were prepared to wait overnight in the airport rather than stay at hotels.

"I wanted to stay for all the summer, but now I'm going home," said 27-year-old Stefano Alquati from Rimini, Italy, who travels each year to Sharm. "It's not good to stay here. ... Sharm el-Sheik is finished, the business and all. I saw the panic."

Among the dead were two Britons, two Germans, an Italian and a Czech, according to Abdel Fattah and officials from the victims' nations.

CBS News Correspondent David Hawkins reports that none of the casualties were American.

The attacks were well-coordinated. The car bombs — apparently driven by suicide attackers — detonated almost simultaneously at the 176-room luxury Ghazala Gardens hotel in Sharm's main strip of Naama Bay and also two miles away in a minibus lot in the Old Market, ravaging a coffee shop frequented by Egyptians who work at Sharm's resorts.

A third blast, hidden in a sack, went off about the same time near a boardwalk along the beach where tourists often stroll at night.

At the Ghazala Gardens hotel, construction workers cleared away the flattened reception lobby after emergency teams apparently gave up the search for survivors after a car packed with 660 pounds of explosives barreled into the hotel's driveway and detonated.

Officials said the death toll was not expected to rise significantly.

The attackers also pinpointed holes in the resort's security: The Ghazala is one of the few hotels with a reception area easily accessible from the main road, and the Old Market has no security checks, unlike parking areas along the main hotel strip, a security official involved in the investigation told The Associated Press.

Egyptian police detained at least 20 people for questioning, including local Bedouin tribesmen near the scene of the bombings, although none were currently suspected of involvement, said police officials speaking on condition of anonymity because the investigation was ongoing.

One security official involved in the investigation said some witnesses told police the bombers "did not appear to be locals." DNA samples were being analyzed, he said, although he would not elaborate if those samples belonged to attackers. He spoke on condition of anonymity because the investigation continued.

Several hours after the Sharm attacks, a group claiming ties to al Qaeda took responsibility for the bombings in a statement posted on an Islamic Web site. The group, the Abdullah Azzam Brigades, al Qaeda, in Syria and Egypt, was one of two extremist groups that also claimed responsibility for the October bombings.

The group also claimed it had carried out the attacks to avenge the killings of Muslims in Afghanistan, Iran and Chechnya and to strike at Israelis and the Egyptian regime.

Hours later, a previously unknown group calling itself the Holy Warriors of Egypt faxed a statement to newspapers disputing the al Qaeda claim and saying it had carried out Saturday's attack. It listed the names of five people it said were the bombers.

The authenticity of the two statements could not be immediately verified.

Meanwhile, the group al Qaeda in Iraq released an Internet video that appeared to highlight one reason why militants might have targeted Sharm: the presence of Israeli tourists.

The video did not mention the Sharm bombings nor claim responsibility, but it showed the interrogation of Egypt's top envoy to Iraq, Ihab al-Sherif, whom the group kidnapped and said it killed earlier this month. In the video, the diplomat was asked about Egypt's 1979 peace treaty with Israel, which allows Israelis to travel without visas to a zone known as "Part C," along the Sinai's eastern coast.

"From which point does Part C start?" a questioner asked al-Sherif. "From Taba to Sharm el-Sheik," he replied.

"If you seek an evidence on how the Jews are desecrating the land of Muslims, contemplate the words of the Egyptian ambassador," said a statement, posted with the video on an Islamic Web forum.

Meanwhile, Sharm el-Sheik was girding for a blow to tourism after years of furious expansion.

At the airport, British tourist Reena Gurm from Reading screamed at a tour operator after being told her flight out had been delayed until Sunday.

Offered accommodation at a hotel overnight, she yelled: "What if something happens to us on the way? I want to go home. If it's in Naama Bay, I am not going."