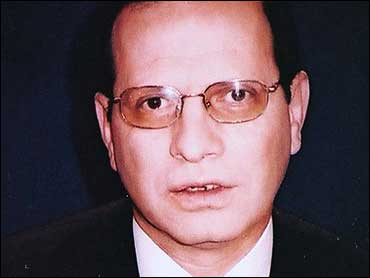 Al Qaeda's wing in Iraq claimed Thursday it had killed Egypt's top envoy who was abducted by gunmen last weekend and warned it would go after "as many ambassadors as we can" to punish countries that support Iraq's U.S.-backed leadership.

An Egyptian official in Cairo said Egypt would temporarily close its mission here and has recalled its staff.

The announcement from Iraq's most feared terror group appeared on an al Qaeda-linked Web site and featured a brief video showing the blindfolded diplomat, Ihab al-Sherif, wearing a polo shirt. The video did not show his death, but the statement promised more details later.

The Iraqi foreign ministry offered condolences for the "assassination" and an Egyptian diplomat who spoke to Egyptian reporters in Cairo said the government was sure al-Sherif was dead "from our own means." He spoke on condition of anonymity and did not elaborate.

In other recent events:

In its latest statement, al Qaeda said it did not announce al-Sherif's kidnapping until after the subsequent attacks "to be able to capture as many ambassadors as we can."

In Najaf, President Jalal Talabani, a Kurd, called for a "war of annihilation" against al Qaeda and other groups that include foreign Islamic extremists.

Iraqi officials, meanwhile, sought to assure foreign governments that their diplomats would be safe. Officials said al-Sherif, a former deputy ambassador to Israel, was grabbed in a dangerous neighborhood while traveling without armed escorts.

Egypt's U.N. ambassador asked the U.N. Security Council on Thursday to urgently address the issue of protecting diplomats in Iraq. Ambassador Maged Abdelaziz said the Security Council should address the issue "in a manner which would secure the lives of those diplomats, not only of Egypt but of other countries who have been subject to such brutal attacks in the past few days."

The United Nations itself lost an envoy in Iraq in August 2003, when a bomb ripped through the world body's headquarters in Baghdad. The U.N. withdrew from Iraq following the death of Sergio Vieira de Mello and 22 others, citing security concerns, but has returned though in far smaller numbers.

According to the Iraqi Foreign Ministry Web site, there are 46 foreign missions in Iraq, including 14 from predominantly Arab or Muslim countries. The numbers include Egypt.

The United States has been urging Arab states to upgrade their missions as a sign that Iraq's government, dominated by Shiites and Kurds who are a minority in the Arab world, has won acceptance by its neighbors.

Saad Mohammed Ridha, the head of Iraq's diplomatic mission in Cairo, told The Associated Press that Egypt's foreign ministry told him late Thursday that the mission would close temporarily and the staff was being recalled.

"We are very sorry about this decision," Ridha said. "We are as sad as they are. It (al-Sherif's killing) was a horrible act."

Seeking to bolster public confidence, Interior Minister Bayan Jabr said Thursday that nearly 1,700 suspected insurgents have been detained and 41 killed in skirmishes during the six-week long Operation Lightning in Baghdad. About 1,000 terror suspects remain in custody, including four Sudanese, three Palestinians, two Egyptians, two Jordanians and one Syrian, he said.

Such assurances and appeals for diplomatic solidarity were unlikely to assuage fears within the diplomatic community, already hunkered down behind blast walls, concertina wire and armed guards.