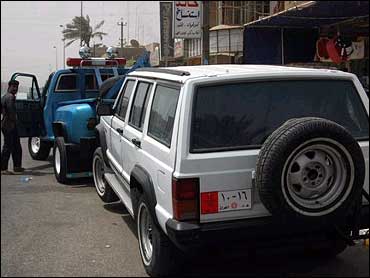 Two diplomats, speaking in Cairo and Baghdad on condition of anonymity because of the sensitivity of the issue, said Ihab al-Sherif was kidnapped late Saturday in the Iraqi capital.

The Egyptian Foreign Ministry confirmed the diplomat was missing and said "contacts are underway with the Iraqi government and all other sides to clear up the truth about the disappearance of ambassador Ihab al-Sherif."

Al-Sherif, 51, was taken Saturday night by about eight gunmen after he stopped to buy a newspaper in western Baghdad, witnesses said. He was pistol-whipped and forced into the trunk of a car as the assailants shouted that he was an "American spy," the witnesses said.

The abduction is an apparent bid to discourage the country's Arab neighbors from bolstering ties to the embattled U.S.-backed government.

The attorney general again condemned abuses by American soldiers at the Abu Ghraib prison outside Baghdad, blaming them on a handful of individuals, not official U.S. policy.

"To believe that memos and decisions at the top created an environment that led to abuses would lead one to the conclusion that these abuses were widespread, at many locations and by many people. From the best we can tell, it really related to the actions of the night shift at one cell block at Abu Ghraib," he said.

As White House counsel in President George W. Bush's first term, Gonzales helped the administration's controversial legal strategy in the war on terror. He authored a memo in 2002 contending that Bush had the right to waive anti-torture laws and international treaties that provide protections to prisoners of war. Critics have said the memo helped lead to abuses of the type seen at Abu Ghraib.

Meanwhile, it is feared that the kidnapping of Egypt's Al-Sherif could undermine U.S.-backed efforts to encourage Iraq's Arab neighbors to send high ranking diplomats to Baghdad. The posting of more senior diplomats to Iraq is seen as a key step to restoring confidence in that country's fledging transitional government, which is struggling to control a raging insurgency.

In mid-June, the Egyptian government said it would upgrade relations with Iraq to full embassy status headed by an ambassador, but it was not immediately clear if al-Sherif currently held the full ambassador title.

Three Iraqis who claimed they witnessed the abduction in Baghdad's western al-Jamaa neighborhood said gunmen accosted al-Sherif as he stopped to buy a newspaper in Rabie Street, beat him and accused him of being an "American spy."

No group has claimed responsibility for al-Sherif's kidnapping but it may be linked to Cairo's latest move to help in Iraq's political reconstruction, which insurgents are bent on derailing.

Egypt has been training Iraqi security forces and civil servants under a U.S backed international program and on Friday about 140 Iraqi civil servants arrived in Cairo.

Al-Sherif had served as charge d' affairs in Syria and Israel before being transferred to Iraq and is the second Egyptian diplomat to have been kidnapped in Iraq. He is married with two girls and his family lives in Cairo.

Mohammed Mamdouh Helmi Qutb, then Egypt's third-ranking diplomat, was briefly detained in July 2004 by Islamic militants who claimed they wanted to deter Egypt from deploying troops in Iraq.

Egypt was among many Arab countries that withdrew their ambassadors from Iraq shortly after Saddam invaded Kuwait in 1990, causing a deep rift between Iraq and its neighbors.