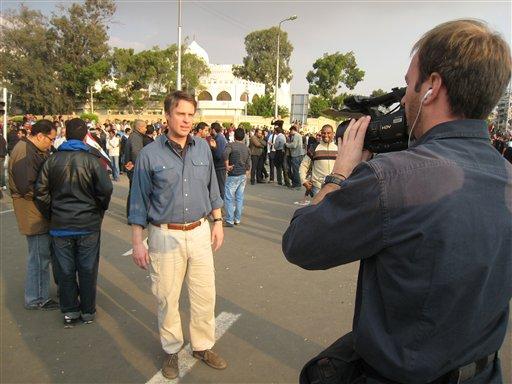 NEW YORK (AP) - The fall of Egyptian President Hosni Mubarak's government Friday made for a giddy day of media coverage that combined the historical sweep of an event such as the fall of the Berlin Wall with the pandemonium of New Year's Eve in Times Square.

"This is one of those days that all of us would say we'll never forget," CNN anchor Wolf Blitzer said, in words that were soon echoed in a mid-afternoon speech by President Barack Obama.

A week ago, Blitzer's colleague Anderson Cooper cowered in a Cairo hotel room with shades drawn for a live broadcast, following two days in which the Mubarak regime unleashed men to beat, intimidate and take into custody journalists who had entered Egypt to cover pro-democracy demonstrations. The climax of the 18-day revolution came suddenly on Friday, in a short speech by Vice President Omar Suleiman that Mubarak had resigned and turned power over to the military.

"It was so brief I thought I had missed it," said NBC News reporter Richard Engel. "Then the crowds around me began to cheer."

Thousands danced in the street, waving flags, crying and cheering into the Egyptian night. The images of those scenes were key elements in all the coverage.

Fox News Channel's Leland Vittert was delivering a live report from above Cairo's Tahrir Square, seemingly unaware that Suleiman had been speaking, when the crowd's eruption caught him off guard.

"We're now hearing this unbelievable roar from the crowd," Vittert said. "We don't know what that's about. This is about as developing a situation as you can get. It's unbelievable what's going on in the square."

Studio news anchors in New York, scanning their computers, filled Vittert in on the reason for the cheering.

Vittert later stood in Tahrir Square, surrounded by people chanting and shouting. One man held up a baby for the cameras and another, behind Vittert, a banner in English proclaiming, "Mission Accomplished." He called it an "absolutely incredible party."

"This is a celebration of a country that has finally stood up for itself," he said.

The crowd quickly quieted down when Vittert asked, "What do you think of America?"

The Associated Press sent a flash to its members in covering the story Thursday and Friday, once when Mubarak said he had passed his authority to his vice president and again when he stepped down. That's the AP's highest priority for a story, used only four times since Obama was elected president.

CNN was sharpest of the TV networks in covering the pivotal moment. It carried Suleiman's speech, with a translator whose voice betrayed obvious surprise. As soon as the key word "resign" was heard, microphones in Tahrir Square picked up a noise that sounded like a late touchdown pass had been caught.

Each of the broadcast networks interrupted regular daytime programming for special reports within five minutes. NBC's Brian Williams was the only one of the top three anchors on duty (David Muir was on for Diane Sawyer for ABC; Jeff Glor for Katie Couric on CBS) and the experience showed. He was quickest to catch the historic import of the moment and the extraordinary nature of the response, pausing for 15 seconds and suggesting viewers simply listen.

As Ron Allen delivered a report from Tahrir Square, a man leaned into his microphone. "I am so happy," the man said, adding "Mubarak, you have ugly face."

The moment illustrated how everyday Egyptians, many of them reluctant to speak to journalists for the past two weeks, or reluctant to be seen criticizing Mubarak, suddenly changed and crowded around reporters, hoping for a chance to deliver their opinions.

"This is what freedom sounds like," Allen said. "It's the only way I can describe it."

Muir and Christiane Amanpour were much more cautious in their initial ABC report, concentrating on questions of how the succession would work. It didn't help that on-scene correspondent Jim Sciutto's connection initially cut off ("Can you hear me, New York?" he said). Terry Moran seemed to snap everyone to attention.

"It is astonishing," he said. "The news hit this crowd like an enormous wave."

At CBS, on-scene reporter Elizabeth Palmer noted how the day brought many uncertainties with it, but Egyptians were intent on celebrating their achievement.

Al Jazeera's English network, little seen in the U.S. but available on the Internet, displayed the advantage of its staffing throughout the Arab world. Al Jazeera aired pictures from Alexandria when U.S.-based networks had nothing beyond Cairo. Correspondent Ayman Mohyeldin struggled slightly to keep emotions in check when asked by his anchors what he felt personally about the moment.

"I never thought I would live to see a day like this," Mohyeldin said.

On Fox, anchor Megyn Kelly expressed worry about some of what she was seeing, noting that many people in Israel were worried about what a new Egyptian government would mean and whether it would be an opening to power for Muslim extremists.

"Rather than the negativity," commentator Alan Colmes told her, "let's support this."