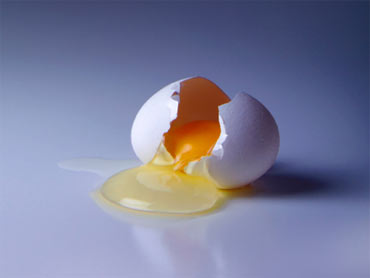 If you like eggs, this is good news: A new government study finds they're actually 14 percent lower in cholesterol and 64 percent higher in vitamin D than previously thought.

Registered Dietitian Cynthia Sass stopped by the "The Early Show" Tuesday to explain what this may mean for your health.

What caused this change in cholesterol and vitamin D levels?

Sass, the author of "Cinch!: Conquer Cravings, Drop Pounds, and Lose Inches," told "Early Show" co-anchor Chris Wragge the saying "You are what you eat" applies to chickens too: Healthier feed results in healthier eggs.

But she pointed out, "One large egg is still 185 milligrams of cholesterol, which is almost the maximum amount recommended for someone with heart disease. So you can't go crazy, but the good news is that that extra vitamin D can be very beneficial."

The yolk is considered by many the bad part of the egg, but Sass explained that there is nutritional value in it: "It's not just the vitamin D. There's also a really important nutrient called choline -- about 90 percent of us are short on this. It's been linked to a reduced level of inflammation in the body."

"One egg has about 25 percent of the choline we need for the whole day," she said.

"About 200 studies over the past 25 years have looked at the link between eggs and heart disease and found that it's not the cholesterol, but saturated fat that ups the risk of heart disease. An egg happens to be relatively high in cholesterol, but very low in saturated fat, and that's why foods like eggs and shell fish have been re-categorized as 'not so bad for you,"' she added.

And, according to one published study, Sass said, eggs can help you lose weight: "When an egg was added to a low-calorie breakfast, overweight dieters lost 65 percent more weight than when they had the same number of calories from carbohydrates."

How should you have your eggs?

"You don't want to have them with bacon and white bread with butter. Have it with whole grains, produce and natural nut butters. When you combine one whole egg as a lean protein with those other healthy foods, it really helps to balance out that cholesterol, because cholesterol is only found with animal foods. So when you pair it with plant-based foods, your total cholesterol in that meal is quite low."