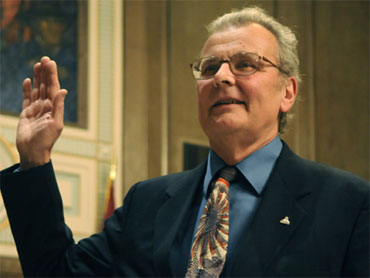 Asheville City Councilman Cecil Bothwell believes in ending the death penalty, conserving water and reforming government - but he doesn't believe in God. His political opponents say that's a sin that makes him unworthy of serving in office, and they've got the North Carolina Constitution on their side.

Bothwell's detractors are threatening to take the city to court for swearing him in, even though the state's antiquated requirement that officeholders believe in God is unenforceable because it violates the U.S. Consititution.

"The question of whether or not God exists is not particularly interesting to me and it's certainly not relevant to public office," the recently elected 59-year-old said.

Bothwell ran this fall on a platform that also included limiting the height of downtown buildings and saving trees in the city's core, views that appealed to voters in the liberal-leaning community at the foot of the Appalachian Mountains. When Bothwell was sworn into office on Monday, he used an alternative oath that doesn't require officials to swear on a Bible or reference "Almighty God."

That has riled conservative activists, who cite a little-noticed quirk in North Carolina's Constitution that disqualifies officeholders "who shall deny the being of Almighty God." The provision was included when the document was drafted in 1868 and wasn't revised when North Carolina amended its constitution in 1971. One foe, H.K. Edgerton, is threatening to file a lawsuit in state court against the city to challenge Bothwell's appointment.

"My father was a Baptist minister. I'm a Christian man. I have problems with people who don't believe in God," said Edgerton, a former local NAACP president and founder of Southern Heritage 411, an organization that promotes the interests of black southerners.

The head of a conservative weekly newspaper says city officials shirked their duty to uphold the state's laws by swearing in Bothwell. David Morgan, editor of the Asheville Tribune, said he's tired of seeing his state Constitution "trashed."

Bothwell can't be forced out of office over his atheist views because the North Carolina provision is unenforceable, according to the supremacy clause of the U.S. Constitution. Six other states, Arkansas, Maryland, Pennsylvania, South Carolina, Tennessee and Texas, have similar provisions barring atheist officeholders.

In 1961, the U.S. Supreme Court reaffirmed that federal law prohibits states from requiring any kind of religious test to serve in office when it ruled in favor of a Maryland atheist seeking appointment as a notary public.

But the federal protections don't necessarily spare atheist public officials from spending years defending themselves in court. Avowed atheist Herb Silverman won an eight-year court battle in 1997 when South Carolina's highest court granted him the right to be appointed as a notary despite the state's law.

Bothwell said a legal challenge to his appointment would be "fun," but believes his opponents' efforts have more to do with politics than religious beliefs.

"It's local political opponents seeking to change the outcome of an election they lost," said Bothwell, who's lived in Asheville nearly three decades and wrote the city's best-selling guide book.

Bothwell was raised a Presbyterian but began questioning Christian beliefs at a young age and considered himself an atheist by the time he was 20. He's an active member of the Unitarian Universalist Church of Asheville and he still celebrates Christmas, often hanging ornaments on his Fishhook cactus.

Bothwell said his spiritual views don't matter to most of his constituents. Bothwell is a registered Democrat but didn't run on a party ticket in the nonpartisan Council election.

Even if he can't force Bothwell out of office, Edgerton said he hopes a legal battle would ultimately force North Carolina's Legislature to determine the legality of the article of the Constitution.

"If the law is wrong, it is the obligation of the Legislature to say it's wrong," he said.

"I mean, there are state laws against spitting in the street," he said. "Why spend the time?"

But the battle is important to Silverman, who says there are scores of other atheist politicians afraid to "come out of the closet." He cited U.S. Rep. Pete Stark of California, the first and only congressman to publicly acknowledge he doesn't believe in God.

"We're trying to change our culture to the point where it's not political suicide," Silverman said.