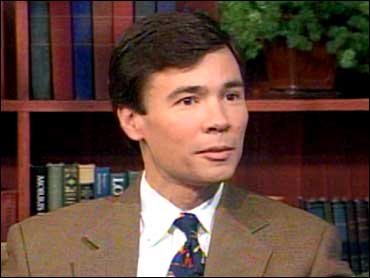 If you are tired of fighting with your kids about eating their vegetables or doing their homework, you might want to try negotiating with them instead.

Scott Brown, who helped start the Harvard Negotiation Project and is president of the nonprofit Conflict Management Group, tells The Early Show co-anchor Harry Smith the most difficult negotiations he has had are with his kids.

He says, "One time, I was coming back from advising the two sides of a civil war and I came back home. My oldest was 7 or 8 years old and I could not get my three kids in bed. And I thought, 'Who am I kidding? I'm supposed to be advising world leaders and I can't even get my kids to the bed.' So I decided to apply some of the skills."

And he has now put it in writing in "How to Negotiate With Kids Even When You Think You Shouldn't."

The key, he says, is persuasive parenting. He explains, "What we're trying to do is change our children's behavior. But more important is changing the way they think so they won't behave the same way the next time. In order to change the way they think, we need to understand how they're thinking and approaching it, and then, deal with it on their level, once we see it from their point of view."

So if, for example, every morning you argue with your daughter about getting dressed for school, Brown has five suggestions to help parents work through this conflict.

Try to Prevent Conflict:
Parents can often predict when a conflict is going to erupt. Typically, conflicts happen when stress levels are already high. In this example, you know that every morning is going to be a fight. And, weekday mornings tend to be stressful because everyone is on a strict schedule - you have to get ready for work and get the kids ready for school while making sure the house isn't trashed and that everyone has the things they need for the day. Clashing over clothes only makes the morning more stressful. So, try and stop the argument before it even begins. Agree on an outfit the night before and lay it out so there's no need for discussion in the mornings. Or, wake your daughter up earlier so you don't feel so rushed, thus lowering stress levels and allowing you to deal better with her feelings about getting dressed.

Control Your Emotions:
We all know that emotion can cloud judgment, making us less effective problem-solvers. Our kids can trigger more stress and emotions in us than anyone else. What parent hasn't simply snapped at a child, "Because I said you can't wear that!"? Of course, your yelling only sparks anger or frustration from your kids. Pretty soon, everyone is so riled up that it's impossible to solve the problem reasonably at all.

Help Kids Handle Their Emotions
Feelings drive kids even more than they drive adults. When kids are tired, they act tired; when they are mad, they act mad. In short, when kids are feeling, they are not thinking. Emotions have an even more disruptive effect on kids than adults, so we need to help kids deal with their emotions. You know what makes your daughter angry and when she's likely to have a meltdown. When talking to her about her wardrobe choices, use a voice that you know won't irritate her. Try and empathize with her feelings about wanting to wear skirts instead of dresses or wanting to look cool. Also, coach your child through her emotions, give her words to describe what she is feeling.

Listen to Learn:
According to Brown, most parents don't listen well. They have pre-conceived ideas about why their children are acting a certain way and don't take the time to truly understand their kids' positions. In this example, you may believe your daughter doesn't want to get dressed for school because she's being lazy and doesn't want to go to school. In truth, she may be nervous about a test or feel uncomfortable in her clothes.

Talk to Teach:
You tell your daughter to get dressed and she acts as though she didn't hear you at all. Brown warns parents not to assume that kids are willfully ignoring you.

You have to convey what you want your kids to know in terms they will understand and in terms that sound appealing to them. Brown points out that marketers understand this concept well. They don't advertise beef as 20 percent fat; they advertise it as 80 percent lean.