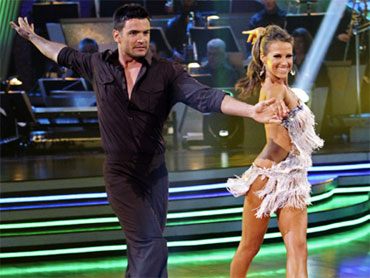 When "Dancing with the Stars'" Edyta Sliwinska takes over the dance floor, it's hard to just focus on her dance moves and not her beauty.

Contestants who are paired up with the Polish professional dancer sometimes even add in their own choreography - like her Season 10 partner, Aidan Turner.

During "Dancing's" two-hour season premiere last night, Turner, the "All My Children" soap star, got a little too excited at the end of their Cha Cha routine and shoved his face into Sliwinska's chest. TMZ captured the cleavage dive. Surprisingly, Sliwinska didn't reprimand him.

The duo only earned 15 points out of 30 and had one of the lowest scores of the night. Astronaut Buzz Aldrin earned the lowest score with 14 points for his Cha Cha peformance with professional partner Ashly Costa.

Sliwinska, who has been part of "DWTS" for six seasons, has partnered with Evander Holyfield, George Hamilton, Joey Lawrence, John Ratzenberger, Cameron Mathison and Jason Taylor.

"This show has become a national phenomenon," she said on her official Web site. "The show is incredibly popular and now everyone loves to dance. I am thrilled to be a part of it since the very beginning!"