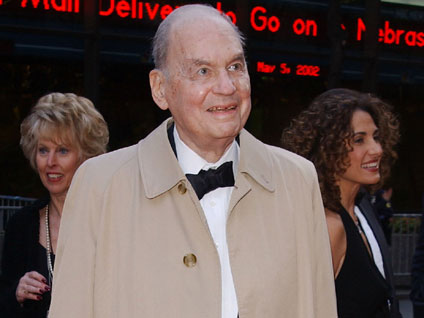 Edwin Newman, who brought literacy, wit and energy to NBC television newscasts for more than three decades, and battled linguistic pretense and clutter in his best sellers "Strictly Speaking" and "A Civil Tongue," has died. He was 91.

NBC News did not immediately say Wednesday where or when Newman had died, or the cause of death.

At NBC from 1952 until his retirement in 1984, Newman did political reporting, foreign reporting, anchoring of news specials, "Meet the Press," ''Today," ''The Nightly News," midday news and a variety of radio spots. He announced the death of President Kennedy on radio and analyzed the Vietnam War.

He also narrated and helped write documentaries, back when they were an influential staple of network programming. They included "Who Shall Live?" - a 1965 study of the difficulties of deciding which kidney disease should receive lifesaving dialysis - and "Politics: The Outer Fringe," a 1966 look at extremism.

"I think I worked on more documentaries than anybody else in TV history," he once said.

Newman, with his rumpled, squinting delivery, impressed his audience not so much with how he looked as with the likelihood that what he'd say would be worth hearing. And his occasional witty turn of phrase might be accompanied by a mischievous smile. The New York Times wrote in 1966 that Newman "is one of broadcasting's rarities. ... NBC's instant renaissance man speaks with the distinctive growl of a rusted muffler. He makes no concessions to the charm boy school of commentator."

He also had a side career as the author of the best-selling books "Strictly Speaking" and "A Civil Tongue," which dealt with the proper use of the language.

He hosted a series called "Speaking Freely," which featured hour-long conversations with notables in many fields.

"People had an opportunity to put forward ideas" he said in a 1988 Associated Press interview. "You could get people to come on who wouldn't normally have been on TV.

"NBC, and I mean this to its credit, never tried to sell a minute of commercials and never interfered with the choice of people. The producer and I chose them."

After his retirement, Newman portrayed himself on various television programs, including guest spots on "The Golden Girls," "Newhart" and in a "Saturday Night Live" skit in which he manned a suicide hot line and kept correcting a caller's grammar.