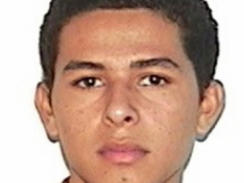 Rivera Gracias was wanted in Jefferson County for the Aug. 17, 2011 stabbing death of Richard Limon, 68, of Denver. Limon, a family acquaintance of Rivera Gracias' girlfriend, was found dead alongside a road on Lookout Mountain, just west of Golden, Colo.

Three other suspects have already pleaded guilty to taking part in the killing, including a man authorities said held Limon's legs while Rivera Gracias wrapped duct tape around Limon's head to try to suffocate him. When that didn't work, Rivera Gracias stabbed Limon nine times with a steak knife, which broke when it punctured his heart, authorities said.

According to an affidavit filed in U.S. District Court, Rivera Gracias talked about killing Limon over allegations he molested Rivera Gracias' girlfriend, who was the daughter of Limon's wife. Jefferson County District Attorney spokeswoman Pam Russell said those allegations were never reported to authorities, according to the station.

Rivera Gracias is suspected of being a member of the Mara Salvatrucha gang, or MS-13, with ties to other gang members in Colorado, Los Angeles and El Salvador. Members of the gang, who cover themselves in tattoos, have been linked by authorities to drug trafficking, drive-by shootings and contract killings, the station says.