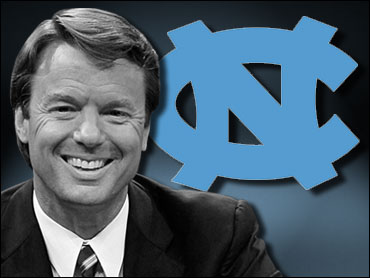 When John Edwards returned to his alma mater in 2005 to found a poverty think tank, the multimillionaire attorney sought more than just a salary: He also wanted tickets to University of North Carolina sporting events.

But the exact details of what Edwards asked of the Tar Heels remain a secret. Neither the school nor the Democratic presidential candidate is willing to release a "ticket wishlist" described in an e-mail between an Edwards adviser and the school's former law school dean.

"It seems absurd to me that Senator Edwards or the university would be treating these documents or this issue like it were a state secret," said Amanda Martin, a Raleigh-based attorney and general counsel of the North Carolina Press Association.

The request for tickets would come as no surprise to Tar Heel fans. A single ticket to a men's basketball game - the team is currently ranked No. 1 in the AP Top 25 - has a face value of about $40 but fetches hundreds of dollars above that on the secondary market. For games against Tobacco Road rival Duke University, a ticket can sell for thousands.

Fans who purchase season tickets are required to donate to the school's athletic booster fund - with the price going up as the seat location improves. Faculty and staff are assigned seats based on a formula of seniority at the school and the number of years they have held season-tickets.

"The university does not provide or promise sports tickets in connection with the hiring process," said school spokesman Mike McFarland, noting that the school applied the same standard to Edwards.

Earlier this year, The Associated Press filed requests under the state's public records law seeking copies of all correspondence between Edwards, several senior advisers and the university's law school and chancellor's office.

In response, the school in Chapel Hill provided roughly two dozen e-mails, which center on the creation of the Center on Poverty, Work and Opportunity - the university-based think tank Edwards ran after his failed campaign for the White House in 2004.

In one message, Edwards' political adviser Miles Lackey refers to a "ticket wishlist" that he planned to send to the school. The university refused to release the document, claiming it falls under an exemption in state law that shelters from public view records related to the employment application process.

The Edwards campaign also refused to release the "ticket wishlist," saying the school had already released other documents, including Edwards' employment agreement.

"While e-mails concerning pre-employment contract negotiations will not be released, the outcome of these discussions is and has been public and can be found in Senator Edwards' employment agreement with the university," said Edwards spokeswoman Colleen Murray, who said the former North Carolina senator "inquired about the possibility of continuing to purchase, in the future, season tickets as he has for many years."

The university and the Edwards campaign also declined to release an attachment to a January 2005 e-mail from Lackey that appears to detail his compensation request.

That stands in contrast with Edwards' decision to release all of his papers from his one term in the U.S. Senate, and the campaign's statement that it would support the university in releasing public papers from his time at the poverty center.

And it's a new twist in the ongoing dispute in the Democratic campaign over public records and transparency. Last month, Democratic rival Barack Obama rapped New York Sen. Hillary Rodham Clinton for not hastening the release of some records from her time as first lady. Obama, meanwhile, has said he doesn't have any copies of his records from his tenure in the Illinois state Senate.

Edwards worked as poverty center director until he declared his candidacy for the White House last December. He earned an annual salary of $40,000. If the school had also given Edwards any tickets as part of his compensation package, Martin said, it would have been required to disclose the grant under North Carolina law.