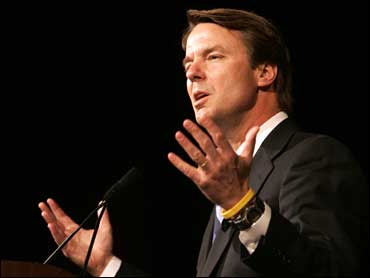 Democratic presidential candidate John Edwards received the endorsement of two unions, the United Steelworkers and the United Mine Workers of America, on Labor Day.

Edwards appeared in Pittsburgh, home of the Steelworkers' international headquarters, for a Monday morning rally.

"America was not built on Wall Street. America was built by steelworkers and mine workers," Edwards said as he accepted their support.

The former senator from North Carolina, who has worked hard to get labor endorsements, has also secured the backing of the United Brotherhood of Carpenters and Joiners of America.

The steelworker and mine worker endorsements mean that Edwards now has more labor endorsements than any of the other Democratic presidential candidates.

"The members of the Steelworkers Union and the Mine Workers union are some of the country's hardest-working, bravest, most courageous workers," Edwards said. "It is their tireless hard work which has helped build a stronger America that benefits all of us. I honor what they do every day."

Edwards suggested Clinton's campaign represents politics-as-usual in Washington and that Edwards represents a break from the past.

The United Steelworkers is the largest industrial union in North America, with 850,000 members and retirees in the metals, mining, rubber, paper, oil refining, chemicals and service industries.

The mine workers union has been in the news recently, advocating for increased safety for coal miners. The union, which includes coal miners, clean coal technicians, health care workers, truck drivers and school board employees, claimed more than 86,000 members on its 2006 Labor Department disclosure forms.

The Steelworkers endorsed former Missouri Rep. Richard Gephardt in the 2004 primaries until he dropped out, and then threw their support behind the failed presidential candidacy of Democratic Sen. John Kerry, D-Mass.