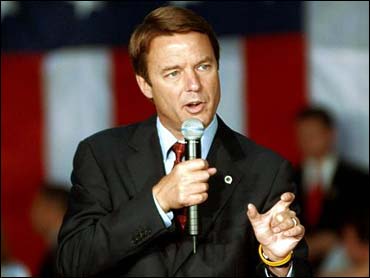 Former Sen. John Edwards has a narrow lead in Iowa over New York Sen. Hillary Rodham Clinton, according to a new poll.

In a survey measuring the strength of potential Democratic presidential candidates, Edwards received 30 percent. Clinton was close benind with 26 percent. Massachusetts Sen. John Kerry was third with at 12 percent.

When Edwards sought the Democratic nomination in the last cycle, Edwards worked overtime to help Iowa Democrats in the 2002 midterm election, donating hundreds of thousands of dollars to help the parties voter turnout operation.

That will be the model for his efforts in the 2006 midterm.

"I think these races are very important and this is a great opportunity," Edwards said. "I'm here to do everything I can."

Edwards focused heavily on retail politics during his last campaign and was rewarded with a surprising second place showing in Iowa's leadoff precinct caucuses.

That showing led to him being put on the ticket with the 2004 nominee, Kerry.

"I went to all 99 counties while I was here," said Edwards. "It was absolutely crucial as to who the nominee was and that was true in 2000 also."

The trip was Edwards fifth through Iowa this year. He vowed to continue to be a familiar face.

"All I have to say is we like Iowa and Elizabeth and I obviously have a lot of friends here," Edwards said.

Since leaving the Senate, Edwards has launched a program at the University of North Carolina focusing on poverty issues and he always makes at least one stop focused on those issues.