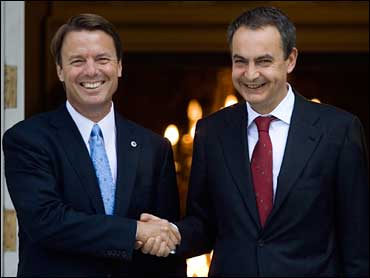 Former Sen. John Edwards has ruled out being Barack Obama's running mate on the Democratic presidential ticket, according to interviews carried by two leading Spanish newspapers on Friday.

"I already had the privilege of running for vice president in 2004, and I won't do it again," Edwards was quoted by El Mundo as saying. El Pais, the country's other leading daily, carried similar comments.

Edwards, who ran for vice president under Sen. John Kerry four years ago and was a presidential candidate in this year's Democratic primaries, had been named as a possible running mate for Obama, the presumptive Democratic nominee.

Calls by The Associated Press to several Edwards aides went unanswered and independent confirmation of Friday's reports was not immediately possible.

"We don't live in a dream world and we have a lot of work to do," Edwards was quoted as saying in comments the newspaper translated into Spanish. "But Obama's potential is unlimited."

Edwards, a former senator from North Carolina, was quoted by El Mundo as saying he would do anything possible to help the Obama campaign other than joining the ticket.

He also had kind words for vanquished Democratic hopeful Hillary Rodham Clinton, whose supporters have suggested she and Obama would make a "dream ticket" if the Illinois senator selects her as his running mate.

But Edwards said only Obama could make such a choice, and he urged him to pick somebody who shared his goals and governing style.

"Hillary Clinton is a great force in the Democratic Party and in the United States, whether she aspires to the vice-presidency or to another position," he was quoted as saying. "She is an extraordinary woman, and the role she will play depends only on her and Sen. Obama."

While in Madrid, Edwards met briefly with Socialist Prime Minister Jose Luis Rodriguez Zapatero and other senior officials. He spoke Thursday to a U.S. business group in Barcelona.

Edwards dropped out of the presidential race in late January following a spirited — if underfunded — populist campaign in which he pledged to stand up for the poor and powerless against corporate interests.

Both Obama and Clinton vigorously sought his endorsement, but he chose to stand on the sidelines until May, when he finally endorsed Obama.

Obama claimed the mantle as the likely Democratic nominee on Tuesday after the final primaries in Montana and South Dakota. Clinton is expected to formally concede on Saturday.