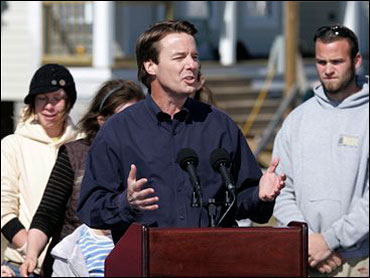 
John Edwards ended his presidential candidacy Wednesday. This is not surprising news: He finished third in every single contest except for Iowa, where he narrowly beat Hillary Clinton. Going forward, he doesn't have the money or the organization to compete with either her or Barack Obama. And, most important, Democratic voters seem content with choosing between the two front-runners - as, in fact, they should. Both Clinton and Obama are capable of running formidable campaigns and, if elected, both could lead successfully.

This is hardly a knock on Edwards's political talents. As anybody who attended his town meetings could attest, he may have been the most effective campaigner of all - capable of establishing an instant connection with audiences, then sweeping them up with a moving, coherent story about what was wrong with America and how he proposed to fix it. Edwards was also, I would argue, a more versatile campaigner than his rivals. He was terrific working the grassroots, much like Obama, but also excelled in the debates, just as Clinton has. As his advisers were constantly reminding reporters - most memorably, through this priceless video - focus groups frequently named Edwards the overwhelming "winner" in those televised exchanges. Alas, a media preoccupied with the Clinton-Obama rivalry rarely seemed to notice.

Still, if Edwards wants to blame somebody for his defeat, he shouldn't look at the media. He should look at himself. And I mean that in the best sense possible. Edwards' biggest problem may have been that he was too compelling - so compelling that his rivals effectively adopted his agenda. From the beginning, Edwards was positioning himself as the champion of Americans struggling to get ahead financially. And rather than simply offer populist rhetoric, he backed it with a serious, comprehensive set of policies.

By the time Clinton and Obama had fleshed out their respective agendas, however, there simply wasn't that much difference among them. Pundits frequently criticized Edwards for his unabashed populism and, it's true, his rhetoric was the most openly confrontational of the three leading Democrats. But in terms of what the three were actually proposing to do, the agendas were virtually identical - not to mention widely popular, if the polls are to be believed. We're all populists now.

Edwards alone can't take credit for that; Clinton and Obama would have endorsed some of the same policies anyway, given the country's problems and their similar ideological pedigrees. But Edwards still played a key role in setting the standards for the debate. And no issue showcases this more than universal health insurance.

When Edwards unveiled his plan in early 2007, it won widespread acclaim for proposing to do something no mainstream Democratic presidential contender had proposed since the early 1990s: To cover everybody and make health care, once and for all, a right of citizenship. But within a few months, Clinton would end up introducing a plan that was, for all intents and purposes, a carbon copy. Obama, meanwhile, would offer a plan that used the same essential structure that Edwards did and reached almost, although not quite, as many people. (It lacked a requirement to buy insurance - which likely means, as yet another study just confirmed, a significant number of people will remain uninsured.)

Edwards was assisted in these efforts by a terrific policy team, including James Kvaal and Peter Harbage, not to mention his wife, Elizabeth. Not only was she an early and consistent advocate for universal coverage. She apparently pushed hard for embracing a true single-payer system - something, I am told, Edwards came very close to doing. He decided against it, largely because it didn't seem politically viable. But he always made a point of telling audiences that his plan created a new public insurance plan into which anybody could enroll - and that, if enough people joined it, eventually his plan would evolve into a single-payer plan on its own. If that happened, he said, he was just fine with it.

Which brings me to the one thing I'll miss most about Edwards' campaign: his intuitive sense of how to sell policies. On the health care issue, for example, it was Edwards who offered the best rationale for requiring everybody to buy insurance - a controversial measure that Obama, for example, has not endorsed. Echewing the complicated, if valid, policy arguments about adverse selection, he invoked a simple analogy: It's like Social Security. Everybody has to pay in so that everybody can benefit. Edwards was also savvy about taxes. Unlike so many Democrats, he didn't flinch at the accusation that some of his proposed programs would require new spending, leading eventually to more taxes. He would simply say yes, that's right - and they're worth it.

His pitch wasn't always perfect; as my friend Mark Schmitt recently reminded me, he sometimes seemed confused about whether he was fighting for the poor, the middle class, or both. (Ideally, it should be the latter.) But overall he got a lot more right than wrong.

Fortunately, Edwards can still have a voice in American politics - and an influential one at that - if he chooses. Last week reports were circulating that Obama was offering him the attorney general's spot (presumably in exchange for an endorsement). That would be fine, although I wonder if he's not better suited to a position like Labor Secretary. There is always the vice presidency, as well, if Edwards wanted to go that route again. Or Edwards could try to find some private sector position that allowed him to weigh in on the issues that matter to him, perhaps as the leader of a grass-roots organization campaigning for economic justice. (Crazy idea, but why not tap him to succeed John Sweeney at the AFL-CIO? OK, crazy idea...).

Critics frequently accuse Edwards of being a phony and I claim no special insights into whether that's true. Maybe all of the talk about fighting for struggling Americans is heartfelt. Or maybe it's all just an act, the kind a good trial lawyer like Edwards could surely pull off. But whether genuine, artificial, or (as is usually the case with politicians) some combination thereof, Edwards' advocacy has served his party - and his country - well.

When Edwards announced the end of his campaign yesterday, he did so where he began it: in New Orleans, which two years after Hurricane Katrina remains shamefully neglected. It's an altogether fitting setting, because it's a reminder that his campaign was always about the people whose interests and values he championed.

John Edwards ended his presidential candidacy yesterday. His campaign, happily, goes on.
By Jonathan Cohn
If you like this article, go to www.tnr.com, which breaks down today's top stories and offers nearly 100 years of news, opinion and analysis