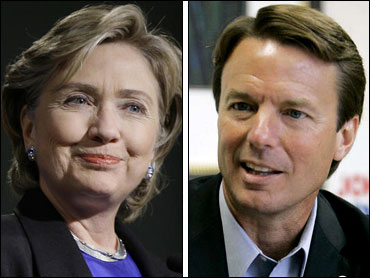 In its most direct attack on Hillary Rodham Clinton, the campaign of Democratic presidential contender John Edwards on Tuesday denounced a fundraising luncheon that included sessions for Clinton donors with members of Congress who have expertise in homeland security.

"Today's Clinton fundraising event is a 'poster child' for what is wrong with Washington and what should never happen again with a candidate running for the highest office in the land," Edwards' senior adviser Joe Trippi said in a letter to supporters.

Edwards and Barack Obama have declined money from individuals who lobby the federal government and have tried to portray Clinton, who does accept lobbyists' money, as beholden to special interests. Obama and Edwards do accept money from corporate executives whose industries have interests in government policies.

The Clinton fundraiser was held Tuesday in the Washington offices of Jones Day, a global law firm with more than 2,200 lawyers in 30 offices worldwide.

Among those scheduled to attend were House members who are backing Clinton and sit on the House Homeland Security Committee, including Reps. Henry Cuellar of Texas, Jane Harman of California, Sheila Jackson-Lee of Texas, James Langevin of Rhode Island and Nita Lowey of New York.

Some of the luncheon chairs and members of the host committee have been lobbyists for a wide range of business interests.

According to the invitation, the luncheon would be followed by "issues breakout sessions." Donors attending the luncheon had to pay $1,000 or $2,300.

Trippi's broadside came a day after Edwards argued that while Clinton's new health care plan is similar to his, she would be unable to reform the health system because she accepts lobbyists' contributions.

"I don't believe you can sit down with lobbyists, take their money and cut a deal," Edwards said Monday in a speech to a union conference in Chicago. "The only way to bring real health care reform is to end the Washington influence game and end it once and for all."