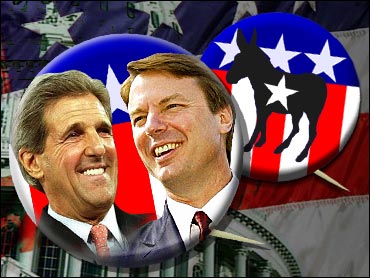 When it comes to politics, there is a theory that presidential candidates pick runningmates with qualities that they, themselves, lack.

"Some will say [President] Bush picked intellect with Dick Cheney," says Jimmy Siegel, vice chairman of BBDO advertising agency. "I think in this case, [John] Kerry picked charisma, charm. I mean, Kerry's a terrific politician, but he's a little bit patrician, a little aloof, a little aristocratic, not the kind of guy you may want to have a beer with at the local bar. John Edwards is friendlier, gregarious, photogenic."

What Democratic vice presidential hopeful John Edwards lacks in experience he more than makes up for in his personal charisma, many agree.

However, is his charm and good looks enough to get his runningmate, Democratic presidential hopeful John Kerry to the White House?

"Whatever you can complain about Kerry not having, he's bringing it," Lesley Jane Seymour, editor-in-chief at Marie Claire magazine tells The Early Show co-anchor Hannah Storm. "Kerry looks renewed, so happy and upbeat and positive. I think there's charisma there."

The image of Kerry and Edwards Wednesday morning strolling on a lawn with their families also brings a bit of nostalgia, Seymour says.

"It brings back a little of the Camelot stuff," she says. "The last time we saw young kids was back in the Kennedys."

And that image may resonate with women, she says, although most important to both men and women are policies.

According to a poll by Mary Claire, health care is " the No. 1 issue for women."

"Both John Kerry and especially John Edwards have a huge background in that," Seymour says. "I think it's going to be important for women."

Noting that 22 million women didn't vote in the last election, she adds, "if they get out, all kinds of things can happen."

Siegel says the images the Democratic team create in next couple of days are very important.

About Edwards, he says, "I think he's a terrific campaigner; the best natural politician since Bill Clinton. And I think he's going to do wonderful things for the ticket - probably a better campaigner than John Kerry and certainly better than Dick Cheney.

Edwards was in consideration to be Vice President Al Gore's runningmate in the 2000 election. And at the time, People magazine named him the sexiest politician.

"Looks matter," Seymour says. "Women aren't going to go out and vote for him because he's cute, but it does get your attention and it does give you that feeling of youthfulness and rejuvenation and positivity."