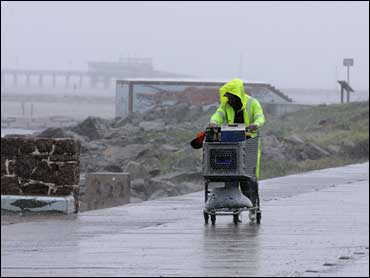 Tropical Storm Edouard hit the Texas Gulf coast east of Galveston on Tuesday with strong winds and heavy rain, but did little more than soak the travelers who came to relax on the tourist town's beaches.

The storm made landfall east of Galveston and west of the Louisiana border, between the small coastal town of High Island and Sabine Pass, and was weakening as it headed inland. Though forecasters had feared it could become a hurricane and both Texas and Louisiana had made emergency preparations, winds never reached hurricane strength of 74 mph. No major damage was reported.

After landfall the storm became lopsided. Normally, the worst weather is to the right of a tropical system, reports CBS affiliate KHOU-TV, but with Edouard, the worst is to the left. That means Houston is on the "dirty side" of the storm and can expect five inches or more of rain.

In Galveston, a few surfers were in the water and some people were riding bikes at the beach as the rains approached.

"We are just out here enjoying it, trying to feel that good breeze that's coming in," said Robert Lemon, 45, of Sweeny, who said he was hoping the storm passed quickly so he could do some fishing.

On Bolivar Peninsula, a thin strip of land northeast of Galveston that separates Galveston Bay from the Gulf of Mexico, emergency workers were ready but had little to do. A few sat at the Gilchrist fire station amid emergency supplies, bottled water and air mattresses. But none of the 700 or so residents had called for help.

Edouard skirted the Louisiana coast on its way to Texas, raising tides and pushing water into bayous and yards. Residents of low-lying areas south of the Intracoastal Waterway in Cameron were ordered to evacuate Monday but were expected to be able to return later Tuesday. Parish officials have been quick to order evacuations ahead of storms since Hurricane Audrey in 1957 killed about 500 people in Cameron.

"This is just like any other thunderstorm," said Leticia Lowe, a spokeswoman for the company.

The storm hit at the height of tourist season in Galveston, but Edouard did not bring the 100-mph winds that punished the Texas tourist hotspot of South Padre Island when Hurricane Dolly tore off roofs and knocked down signs last month July 23.

The Texas coast counts on tourism this time of year. About 50 million visitors to the Texas coast spent about $15 billion in 2006.

Since Dolly, South Padre has regained electric power but its four biggest full-service hotels remain closed as well as the convention center in the community about 260 miles down the coast from Galveston.

Edouard did prompt offshore oil and gas companies to evacuate a few of the 717 manned platforms and 125 operating rigs in the Gulf.

But Shell Oil Co. said the storm had no effect on its offshore operations and it would begin returning evacuated workers Tuesday.