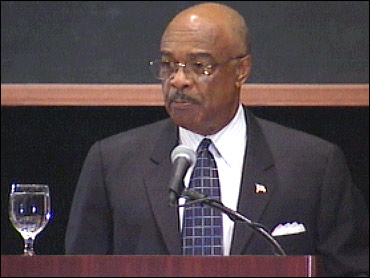 Education Secretary Rod Paige says he chose poor words in calling the nation's largest teachers union a "terrorist organization," but he stands by his claim that the group uses "obstructionist scare tactics" in its fight over the nation's education law.

Paige used the terrorist reference Monday in a private White House meeting with governors while answering a question about the National Education Association, which has 2.7 million members. His words startled members of his audience, triggered outrage from prominent Democrats and deepened the divide between the country's top education official and its largest union.

Paige told The Associated Press in an interview that he made the comment in jest.

"I was making what I now know was a bad joke; it was a poor choice of words," Paige said. "I was referencing the Washington-based organization in general, not teachers."

Gov. Jennifer M. Granholm of Michigan, a Democrat, said the governors were "all a little bit stunned" to hear the union described that way, but Gov. Linda Lingle of Hawaii, a Republican, stood up for Paige.

"He's frustrated" by the NEA's "lack of support for a law that's clearly aimed at helping all children," she told The New York Times.

Reg Weaver, the NEA president, said Paige's comments were pathetic, including the secretary's explanation that he was criticizing the union organization but not teachers.

"I can tell you what my first response was: Scary. That's really frightening," said Diana Garchow, a special-education teacher at Highland Elementary School in Bakersfield, Calif. "It's scary that you can't voice an opinion in this country without being called a terrorist. ... I don't care if it was a joke or what it was, that was a totally inappropriate comment."

The flap comes as the Bush administration faces increasing state opposition to the No Child Left Behind law, widely considered the most significant federal education act since Congress approved its original version in 1965. The law, approved in bipartisan fashion, requires a range of testing, teaching and school-choice changes to help children succeed.

Paige spoke at length Monday about his agency's efforts to help states and schools understand the complex law, but his feud with the NEA is no secret. The union — a reliable supporter of the Democratic Party — plans to sue the Bush administration over funding of the law and wants changes in how it is enforced.

"Secretary Paige and the Bush administration have resorted to the most vile and disgusting form of hate speech, comparing those who teach America's children to terrorists," said Terry McAuliffe, chairman of the Democratic National Committee.

The nation's other major teachers union, the American Federation of Teachers, said it was "unconscionable and irresponsible for any public figure, let alone a U.S. Cabinet member, to undertake this kind of name-calling."

But Gayle Fallon, the president of the AFT chapter in Houston who knows Paige from his work in that city, said Paige was merely being sarcastic.

Included in 100-word statement that his staff characterized as an apology was Paige's assertion that "the NEA's high-priced Washington lobbyists have made no secret that they will fight against bringing real, rock-solid improvements in the way we educate our children regardless of skin color, accent or where they live."

In the AP interview, Paige said opposition to the law has been stirred by at least three groups that are "hard nosed, highly financed and well organized."

Since 1976, when it shifted into an active role in national politics, the NEA has given every presidential endorsement to a Democrat. It is a big political donor, mostly to Democrats.

In the last presidential election cycle, the NEA and its political action committee donated $3.1 million to federal candidates and national party committees, with about $9 of every $10 going to Democrats, according to the nonpartisan Center for Responsive Politics. At that time, national party committees were allowed to raise union donations, part of the "soft money" they are now barred from accepting.