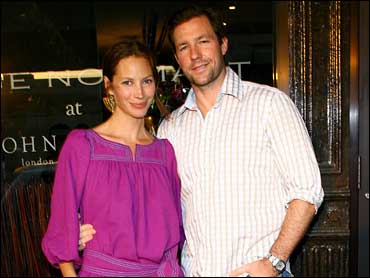 "Friends of ours had tried to fix us up - we both live in New York, we're both pretty low-key, both heterosexual - but she was like, 'Uh, not really interested,'" the 39-year-old actor-director tells Best Life magazine in its October issue. "That did not deter me. I just wanted to get her to laugh."

How long did it take to build up the nerve to kiss her?

"Probably within five minutes of meeting her," Burns says. "Which hurt my chances. It took her a long time to come around. But I got her good and drunk, if I remember correctly, which never hurts."

Turlington and Burns wed in 2003. They have two children.

Burns was seen as the next Woody Allen after directing and starring in 1995's "The Brothers McMullen."

"I was the toast of the town," he tells the magazine. "All of a sudden I was semifamous. There were six-figure checks."

However, his other New York-based movies, including "Sidewalks of New York" and "The Groomsmen," didn't fare well at the box office, and failed to meet critics' expectations.

"I'd been trying to forge another version of Woody Allen's career, to the point that when I signed with ICM right after 'The Brothers McMullen,' I signed with Sam Cohn, who was Woody Allen's longtime agent," Burns says. "The obsession ran that deep."

The idea was to stay in New York and make small dialogue-driven movies, says Burns, who grew up in Valley Stream, N.Y.

"And I have to admit, I love most of my films," he says. "But at a certain point, you have to take your influence and find your own voice if you want to become a relevant artist."

Next month, Burns' new romantic comedy, "Purple Violets," will become the first featured film to be released and distributed by iTunes.