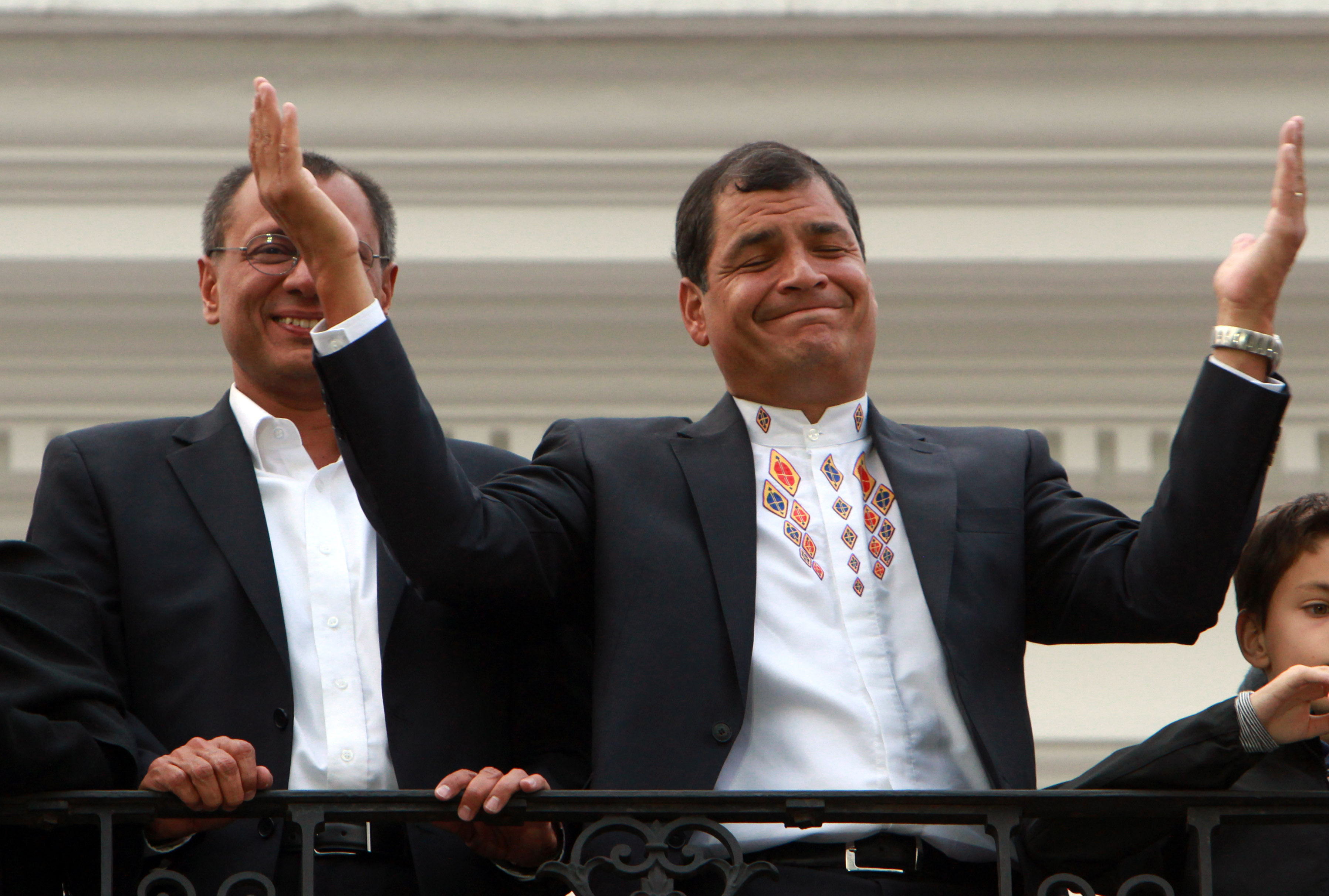 QUITO, Ecuador A landslide second re-election secured, President Rafael Correa immediately vowed to deepen the "citizen's revolution" that has lifted tens of thousands of Ecuadoreans out of poverty as he expanded the welfare state.

"In this revolution the citizens are in charge, not capital," the leftist U.S.-trained economist said after winning 56.9 percent of the vote Sunday against 23.8 percent for his closest challenger, longtime banker Guillermo Lasso.

The fiery-tongued Correa has brought surprising stability to an oil-exporting nation of 14.6 million with a history of unruliness that cycled through seven presidents in the decade before him.

With the help of oil prices that have hovered around $100 a barrel, he has raised lower-class living standards and widened the welfare state with region-leading social spending.

The 48-year-old Correa dedicated his victory to his cancer-stricken friend President Hugo Chavez of Venezuela, who some analysts have suggested he could succeed as the standard-bearer of Latin America's left.

"We are only here to serve you. Nothing for us. Everything for you," Correa told cheering supporters from the balcony of the Carondelet presidential palace Sunday shortly after polls closed.

Yet Correa has also drawn wide rebuke for intolerance of dissent and some analysts have questioned how sustainable his economic policies are. The number of people working for the government has burgeoned from 16,000 to 90,000 during Correa's current term if office, Ecuador's nongovernmental Observatory of Fiscal Policy reported in December.

Michael Shifter, president of the Inter-American Dialogue think tank, called Correa's ramping up of social spending "simply applying the standard recipe for many populist governments in the region." While it succeeds in building political support in the short term, he said, it is not clear whether it is sustainable.

And while Correa has shown himself to be the "undisputed rhetorical leader of Latin America's left" — and should now see his standing enhanced there — Shifter said Correa's consolidation of power has damaged Ecuador's "already precarious institutions" and he lacks the clout, the ambition and the coffers to build a coalition that could curtail U.S. power in the region.

Correa's result Sunday easily topped the 51.7 percent that he won in his first re-election in April 2009. He is barred by the constitution from another 4-year term.

While a practitioner of one-man rule in the Chavez mold, he is more respectful of private property.

Ecuador relies on petroleum for more than half of its export earnings, and he has used this oil wealth to make public education and health care more accessible, and lay thousands of miles of new highways.

Foreign investment has suffered, however, and Lasso, the former head of the Banco de Guayaquil, ran on a platform of guaranteeing multinational businesses more favorable terms, such as abolishing a 5 percent tax on capital removed from Ecuador.

He did not explain, meanwhile, how he planned to pay for efforts to "quicken and deepen" poverty reduction. Skeptical economists say the state can't afford it without major new revenue sources.

Such talk doesn't dim the enthusiasm for Correa of the likes of Jomaira Espinosa.

"Before (Correa), my family didn't have enough to eat" and her father couldn't find work, the 18-year-old said. Now her father has a job as a public servant and she expects to be able to study for free at a university thanks to Correa's programs.

Since Correa took office in 2007, the United Nations says Ecuador's poverty rate has dropped nearly five percentage points to 32.4 percent. In all, 1.9 million people receive $50 a month in aid from the state. Critics complain that the handouts to single mothers, needy families and the elderly poor, along with other subsidies, have bloated the government.

Correa has been widely condemned for using criminal libel law against opposition news media and for such strong-arm tactics as seizing Ecuador's airwaves virtually at will to spread his political gospel and attack opponents.

German Calapucha, a 29-year-old accountant, said he voted against Correa because he's tired of the president's imperiousness.

"He thinks that because he wins elections he has the right to mistreat people," Calapucha said.

Correa has eroded the influence not just of opposition political parties but also of the Roman Catholic Church and independent news media. He has stacked courts with friendly judges and prosecuted indigenous leaders for organizing protests against Correa's attempt to open up Ecuador to large-scale mining without their consent.

Meanwhile, Correa has been unable to stop a growing sensation of vulnerability in a country where robberies and burglaries grew 30 percent in 2012 compared with the previous year.

The graduate of the University of Illinois at Urbana-Champaign gained an early reputation as a maverick, defying international financiers by defaulting on $3.9 billion in foreign debt obligations and rewriting contracts with oil multinationals to secure a higher share of oil revenues for Ecuador.

He has also kept the United States at arm's length while upsetting Britain and Sweden in August by granting asylum at the Ecuadorean Embassy in London to WikiLeaks founder Julian Assange, the online spiller of leaked U.S. government secrets who is wanted for questioning in Sweden for alleged sexual assault.

Correa has, meanwhile, cozied up to U.S. rivals Iran and China. The latter is the biggest buyer of Ecuador's oil and holds $3.4 billion in Ecuadorean debt, according to Finance Minister Patricio Rivera.