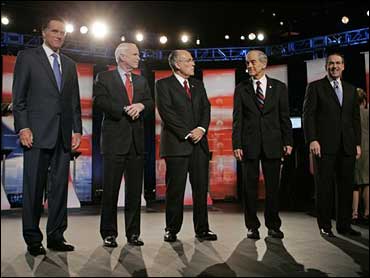 That was a tough question Tim Russert asked the Republican presidential candidates in Florida for the last debate. "The unemployment rate in 2001 was 4.2; it's now 5.0. The debt was $5.7 trillion; it's now $9.2 trillion. There was a $261 billion surplus; there's now a $250 billion deficit. Gas was $1.47 a gallon; it's now $3.02. Why should the American people continue a Republican in the White House with that kind of economic record?"

None of the candidates answered the question squarely. Sen. John McCain switched the subject to the Democrats, who he implied would make those numbers worse. Governor Mitt Romney said he would run on his own record, not that of "Washington."

But since Washington has been run mostly by Republicans for seven years, whomever the party nominates for president will have a limited ability to distance himself from their record. If in November the public blames President Bush for economic mismanagement, and he remains as unpopular as he is now, Democrats will win the White House.

The just-announced stimulus package will not save Republicans from that fate. It will do little or nothing to prevent the economy from falling into recession - and if there is a recession, the public will be receptive to Democratic attacks on Republicans, stimulus or no stimulus. Even if the economy stays out of recession, many voters will continue to have grave concerns about the cost of their health care, the value of their homes, the stagnation of their wages, and the price of fueling their cars. For Republicans to have resisted a stimulus would have compounded their political problem, but enacting one will not solve it.

Here, for the record, is how we would have answered Russert's question.

"Tim, the economy we Republicans inherited was not sustainable. A stock-market bubble had driven unemployment temporarily down, and revenues temporarily up. That couldn't last. In the 1990s we were not paying attention to security threats. We paid the price in lives lost - and also in a major and lasting shock to our economy. In the '90s we were blessed, through no action of our government, with low oil prices too. There was no guarantee that would last, either.

"So when Republicans took office we faced serious new challenges. And we have acted. Thanks to our tax cuts, homeownership is up, consumer net worth is up, and average hourly earnings are up. The deficit has been going down. Real interest rates are lower than they were even in the '90s. More of our people are going to school now than in the '90s.

"I am going to keep taxes and spending as low as we responsibly can so that our economy continues to enjoy long-term growth. I have outlined reforms that will help people pay less for health care and keep more of their paychecks. Neither I nor anyone else on this stage can control the economy. We can't set the price of oil. But we can do a lot to keep the economy as strong as it can be, even when there are shocks. And if the Democrats want to raise taxes or nationalize health care, I'll be there to stop them.