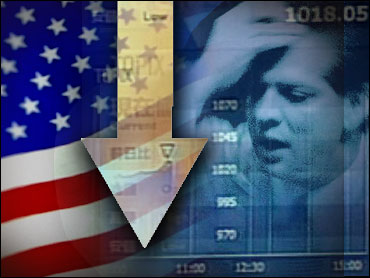 The Federal Reserve reported Wednesday that the U.S. economy cooled off in June and July as consumer spending, especially on autos, slowed significantly after a big surge in early spring.

The survey of business activity compiled from reports from the Fed's 12 regional banks was the latest indication of what Federal Reserve Chairman Alan Greenspan termed a "soft patch" developing in the economy in June.

In another sign of softness, the Commerce Department reported Wednesday that orders to American factories for big-ticket durable goods eked out a small 0.7 percent gain in June, reflecting a surge in demand for military aircraft, following back-to-back declines in orders in April and May.

The Fed's report, known as 'the beige book' for the color of its cover, will be used when central bank policy-makers meet on Aug. 10 to decide whether to raise interest rates to make sure that inflation does not get out of hand.

The new survey found that wholesale prices, especially of such commodities as energy, steel and cement, were rising but that little of those price pressures outside of energy were being passed on to consumers.

Because consumer prices outside of energy have remained moderate, most analysts believe the Fed will stick to its plan to raise rates at a moderate pace in coming months. They are forecasting another quarter-point increase in the federal funds rate at the August meeting. The Fed raised the funds rate for the first time in four years on June 30.

The Fed survey depicted an economy that was continuing to rebound from a sustained period of sluggishness that included the 2001 recession and weak unemployment growth that lasted until mid-2003.

However, the Fed report found, as have other indicators, that activity slowed a bit in the late spring.

"Several districts reported that the rate of growth moderated," the Fed survey said, listing New York, Cleveland, Richmond, Kansas City and San Francisco in particular as regions that detected a slowdown in activity.

Much of the weakness was attributed to a slowing in consumer spending, particularly on autos. However, the Fed report said that there were "pockets of weakness" in manufacturing as well.

The Fed survey depicted travel and tourism, hit hard after the 2001 terrorist attacks, as "strong" and said that residential construction remained healthy as well despite the fact that mortgage rates are now up from their four-decade lows.

The June gain in orders for durable goods, items expected to last three or more years, followed declines of 0.9 percent in May and 2.7 percent in April. The drop in May had originally been reported as an even sharper 1.8 percent fall. Orders last rose in March, when they surged ahead by 5.9 percent.

The 0.7 percent June increase was lower than what analysts had been expecting. Still, it gave hope that the fledgling rebound in the nation's manufacturing sector was not in danger of stalling.

Joel Naroff, head of a Holland, Pennsylvania, economic forecasting firm, said that the small rise in June durable goods orders was disappointing, with many sectors that had been leading the recovery showing weakness.

"This was another in a long string of soft June numbers," Naroff said. "I suspect the June weakness is nothing to get really worried about. The economy is growing, but now the breakneck pace has become a moderate, but sustainable rate."

The biggest orders increase went to transportation equipment, everything from cars to airplanes, which rose by $2.2 billion to $55.5 billion, an advance of 4.2 percent, reflecting strength in defense aircraft and parts. Excluding demand for military goods, new orders would have fallen by 0.4 percent last month, following even bigger declines of 0.6 percent in May and 2.1 percent in April.

Orders for non-defense capital goods were up 1.1 percent in June, following two months of declines. This category is closely watched because it provides an indication of business plans to expand and modernize.

Orders for machinery rose by 0.3 percent last month, but the category that includes computers and electronic parts was down by 1 percent. Communications equipment fell by 4.4 percent.

In the transportation category, demand for motor vehicles and parts rose by 1.3 percent but the biggest increase came in a 79.1 percent jump in orders for defense aircraft and parts. This surge followed a 23.8 percent rise in this category in May.