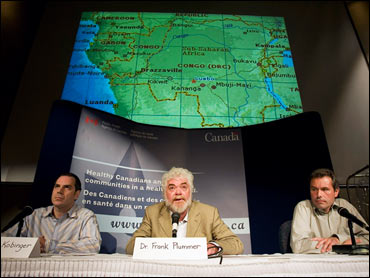 Field doctors have confirmed seven new cases of the deadly Ebola virus in Congo, bringing the total number of people to have contracted the illness here to 24, the Health Ministry said.

Two mobile testing laboratories confirmed the latest cases in Kampunga, a small district in the province of Kasai Occidental, said Dr. Benoit Kebela, director-general of Congo's Health Ministry. A total of six people have died of the virus so far.

Kebela said the two mobile laboratories, provided by the Atlanta-based Centers for Disease Control and the National Public Health Agency of Canada, had relayed the news to Congolese officials.

The outbreak in Congo is the first major resurgence of Ebola in years.

About 400 people have fallen ill in the affected region of Kasai Occidental over the past five months, and at least 170 people have died - though only six of those killed are confirmed to have died from Ebola. The fate of the other 18 who tested positive for Ebola was not immediately clear.

Some of those who have fallen ill since April have tested negative for Ebola, but positive for other diseases such as shigella - a diarrhea-like disease - or typhoid.

According to the World Health Organization, the so-called "Zaire strain" of Ebola kills over 80 percent of those infected through massive blood loss, and has no cure or treatment. It is spread through direct contact with the blood or secretions of an infected person, or objects that have been contaminated with infected secretions.

Shigella and typhoid - a common disease in the region - respond to antibiotics, unlike Ebola.

Congo's last major Ebola outbreak struck in Kikwit in 1995, killing 245 people. Kikwit is about 185 miles from the site of the current outbreak.

WHO says more than 1,000 people have died of Ebola since the virus was first identified in 1976 in Sudan and Congo. Primates, hunted by many central Africans for food, can carry the virus.