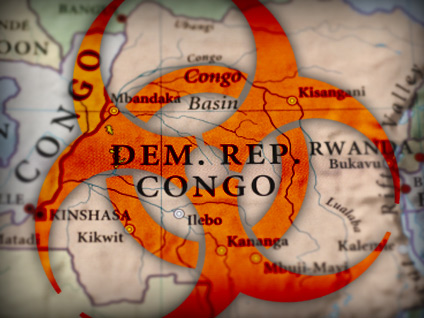 (CBS News) An outbreak of the Ebola virus is sweeping the Democratic Republic of the Congo and has claimed 31 lives so far, the World Health Organization (WHO) said on Thursday.

There are now 65 probable cases of the disease, with 108 more people potentially infected. Five of the deaths were health workers.

"The epidemic is not under control. On the contrary the situation is very, very serious," Eugene Kabambi, a WHO spokesman in DR Congo's capital Kinshasa, told Reuters.

An epidemic was declared on Aug. 17, according to AFP. In late August, there were only 15 confirmed cases of the Ebola virus in the region with 10 deaths.

Ebola HF can manifest between two to 21 days. The virus is passed through direct contact of blood and/or secretions from an infected person, which makes it especially dangerous in crowded areas. There is no treatment or vaccine but supportive care can be provided if a patient is diagnosed early enough.

Medecins Sans Frontieres (MSF) previously told the BBC that they believe the version of the Ebola virus infecting the DRC area is the Bundibugyo strain, which makes it completely unrelated to Ugandan outbreak that killed at least 16 people earlier this summer. The Bundibugyo strain is fatal in about 40 percent of cases, which is lower than some of the other strains, an article in the CDC publication Emerging Infectious Diseases stated.

Reuters added that the DNR outbreak is being blamed on tainted bushmeat that local villagers hunted. So far, infected have been living in the towns of Isiro and Viadana, and the disease has not yet reached the capital Kinshasa. At least 9 million people live in Kinshasa, which has a poor health system.