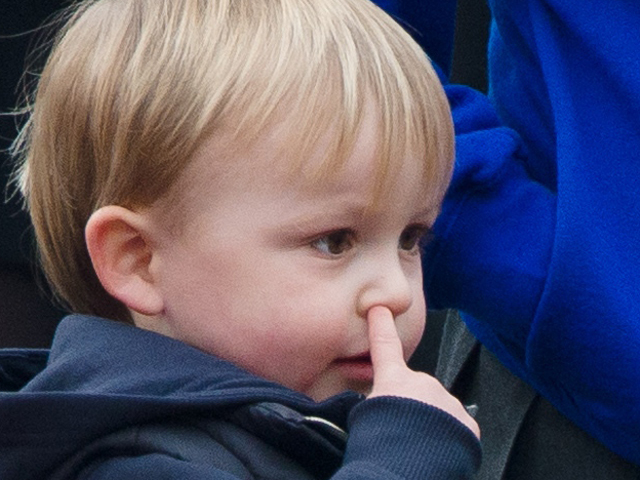 Parents, next time you see your child picking his or her nose you may want to fight the urge to scream "stop!". A Canadian biochemist is making waves with a new theory that picking your nose -- and eating it -- may be an evolutionarily-backed way to boost your immune system's protective powers.

And, he hopes to conduct a study to prove it, CBC News in Canada reports.

Scott Napper, an associate professor of biochemistry at the University of Saskatchewan in Canada, told CTV News in Saskatoon that he proposed this theory one day while teaching a classroom full of bored college students.

He said almost all kids try to taste things that come out of their noses, and its possible nature is trying to push them to adopt this behavior.

"I got their attention by saying that's why snot tastes so sweet. And a lot of them were nodding along like they agreed, but not really realizing what they had acknowledged," he told the station, laughing.

Napper told the CBC that snot's sugary taste may signal the body that it should be eaten, and the immune system may obtain information from its contents.

"By consuming those pathogens caught within the mucus, could that be a way to teach your immune system about what it's surrounded with?" Napper said he asked his students, adding he's seen this behavior in his two daughters, who may be just "fulfilling what we're truly meant to do."

Mucus is secreted by tissues that line the mouth, nose, sinuses, throat, lungs and gastrointestinal tracts, according to WebMD. It acts similar to flypaper, trapping bacteria, dust and other unwanted substances before they can enter the body. When mucus and its trappings dry out, a "booger" comes to be.

Napper told the CBC this theory may fit in with other evolutionary theories that suggest people's improved hygiene over the years has led to increases in allergies and immune diseases.

The so-called "hygiene hypothesis" is a theory that early exposure to germs and certain infections could boost the development of the immune system, according to Dr. James T.C. Li of the Mayo Clinic.

Children who grow up in rural parts of the country and are around animals seem to be less likely to develop asthma than other children, Li added, though he said the hygiene hypothesis may be too simple of an explanation for this effect.

Recent studies suggest the hypothesis may explain whyfood allergies are more common in families with higher incomes compared to those with lower ones, and why U.S. born children are more likely to have allergic diseases like hay fever and eczemacompared with foreign-born children.

Therefore, if more children pick their nose and eat their spoils, can this act lead to better immunity based on the hypothesis?

"From an evolutionary perspective, we evolved under very dirty conditions and maybe this desire to keep our environment and our behaviors sterile isn't actually working to our advantage," Napper told the CBC.

He wants to put this theory to the test, noting this type of study would require volunteers to be given a molecule up their noses, with half the group picking it and eating it and the other half sticking to their typical routines.

"Then you could look for immune responses against that molecule and if they're higher in the booger-eaters, then that would validate the idea," he said.

But Dr. William Schaffner, chairman of the department of preventive medicine at Vanderbilt University and past president of the National Foundation of Infectious Diseases, told ABC News that he doesn't buy this theory -- because people are eating their own boogers quite frequently as it stands.

"Because it's part of your own body fluids, you swallow nasal secretions all the time during the day and while you're asleep," he said.

WebMD has more information on the role of mucus.