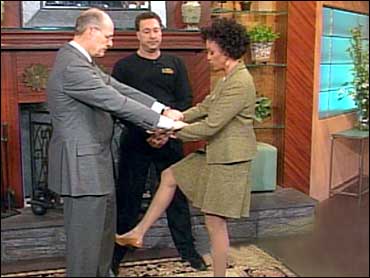 If you ever find yourself in a dangerous situation, knowing a few self-defense techniques may save your life.

In the third part of The Early Show's "Safe and Sound" series Tom Patire, author of "Tom Patire's Personal Protection Handbook," demonstrates a few of those techniques to co-anchors Rene Syler and Harry Smith.

The key to your safety is being prepared. If all the attacker wants is your wallet or your purse, give it to him, Patire advices. Do not risk your life trying to defend a material possession. However, if after he rifles through your purse, he wants you to come with him, it's time to protect yourself.

Many people - women in particular - decide that they will protect themselves by carrying pepper spray, buying a personal sound alarm or learning how to use their car keys as a weapon. But Patire says he has learned by surveying people who attend his seminars that in a true crisis, these devices seldom work. For instance, most women keep the pepper spray on their key chain. If your keys are in your purse and the thief takes your purse, you're out of luck. If your keys are in the laundry room and you are being attacked in your bedroom, you are out of luck. Plus, did you know that pepper spray expires? Did you know that those personal alarms (pull a pin and they emit a LOUD noise) run on batteries? And he notes, if you're not trained in self-defense, these tools could be used against you.

He writes, "What I teach my students is 'confuse, then leave.' In other words, confuse your attacker by short-circuiting the signals the nervous system sends to the brain, and then get away as quickly and noisily as you can. Less is better. The less force you need to expend, the less wear and tear on your body, the less mental stress, and the less time it takes to escape unharmed, the better the system is working." (pg 219)

Anybody can perform these moves because you don't need to be super-strong, and the movements are physically similar to things you do each day, such as turning a key or knocking on a door.

A government study found that in order for an action to be committed to muscle memory, you have to repeat it 25,000 times. Patire's self-defense moves are all based on everyday movements so that when you find yourself terrified, facing an attacker, these self-defense techniques will come naturally - you won't freeze and forget what to do.

Statistically ,you are most likely to be grabbed/attacked from the front instead of the back so both of these moves focus on that scenario.

When to Use: When grabbed by the arm wrist or hand, and your other hand is free.

Everyday Motion to Remember: knocking on a door.
Why it Works: you are disrupting a nerve in the middle of the hand, which will reflexively cause the attacker to open his hand and release his grip.

He points out that punching the assailant would not be an option in this scenario because it is not a natural motion. He says even folks who have been taught how to punch correctly typically don't practice the skill. When they get in a tight spot and have to throw a punch, they often wind up missing the target or breaking their hand.
Shin Insertion

When to Use: You should always have a back-up move prepared. If you are unable to use the V-Trigger because both of your hands are constrained or your attacker is wearing gloves, this move is a good alternative.

Everyday Motion to Remember: A low-level kick, like playing kickball or soccer.

Why it Works: The shinbone is very close to the skin, allowing easy access to sensitive nerve centers. Disrupting these will start a chain reaction that causes the attacker to release his grip.

In addition to knowing these moves, Patire says you must be mentally prepared to defend yourself.

"...the best attitude to take is one of resentment," he writes. "Send your attacker mental messages such as "You have to be nuts to put your hands on me!" or "There is no way you're going to dictate the course of my life!"