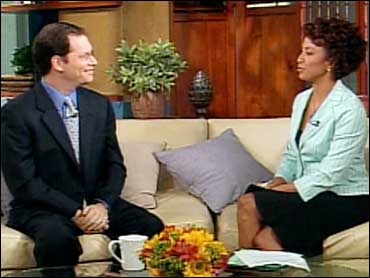 Catching the right amount of sleep can be a difficult task for kids going back to school, especially after a summer filled with fun in the sun.

So Dr. Michael Breus, a sleep expert from WebMD.com, visited The Early Show to offer advice on how to get your kids back on a healthy sleep schedule before the new school year begins.

Dr. Breus says, "Kids that are sleep deprived may be falling asleep on the ride to school in morning. They may be moody. Younger children actually tend to act a little rambunctious when they're sleep-deprived."

He says, "Sleep deprivation induces significant reductions in performance and alertness. Reducing your nighttime sleep by as little as one-and-a-half hours for just one night could result in a reduction of daytime alertness by as much as 32 percent.

"Even 20 fewer minutes of needed sleep may significantly affect behavior in many areas. One study showed that those students with Cs, Ds and Fs got about 25 fewer minutes of sleep and went to bed an average of 40 minutes later than A and B students. Research has shown that teens suffer lower self-esteem and more depression when they don't get enough sleep."

So here are some things parents can do before school starts:

Wake Your Kids Up Earlier - Get your kids to wake up earlier, rather than sending them to bed earlier. This works for kids who are in first grade and up, and is particularly helpful with teens. Do this in 15-minute increments. Each day wake them up 15 minutes earlier until they are at their school time wake-up time. After waking up your kids earlier, keep your kids active during the day. This will tire them out naturally, and then, you can start to slowly move them toward their normal bedtime.

Change Meal Times - Your body responds to food and sleep. Look at your summer meal times. They tend to be later than dinner times during the school year. They also tend to have sugar-filled snacks closer to bedtime. Start moving the meal times down by 15 minutes each day in order the get your kids used to a new time. Eliminate sugar snacks several hours before bedtime.
Teach Sleep Hygiene - Kids love routines. Routines set expectations and help train behavior. Teach your child good sleep habits, also known as "sleep hygiene." Limit TV and other "screen time," such as computers, video games, and do not put a TV in your child's bedroom. Children with a TV in their room tend to go to bed later and get less sleep than those without.

Some kids, and even teens, can get argumentative when bedtime comes. so there are a few other things you can try. For young kids, a bath can send a signal to their body that it's time to go to sleep. Your body temperature drops by a quarter to half-degree right before you fall asleep. A bath will raise your child's body temperature, which will then quickly drop after you remove them from it. A shower will work, as well.

Another sleep-inducing tip is to have them eat something with the chemical tryptophan in it. A glass of warm milk can do the trick. Other foods like cheddar, avocado and bologna also contain tryptophan. If external factors like noise or light are an issue, try tools like blackout shades or a noise machine.

Homework and Extracurricular Activities - It's important to make sure your teen gets the same amount of sleep every weeknight. On average, teens need between 8 1/4 to 9 1/2 hours of sleep each night. Try not to let them stray from their schedule frequently, but if they do have to stray, don't let them do it for two or more consecutive nights. It is critical to talk with teachers, coaches, and bosses, to see if your child is exhibiting any signs of sleep deprivation. This may involve you taking some time to educate the educators.

Weekend Sleep – Especially in adolescents, weekend sleep schedules tend to be much different than their weekday schedules, in both quantity and timing. One study of more than 3,000 adolescents showed that the average increase of weekend over weekday sleep across ages 13-19 was one hour and 50 minutes. As a result, their sleep schedule during the school week is disrupted by the shift that took place over the weekend.

Help your kids follow the same regular sleep schedule on the weekends as they follow during the week. If they go off schedule, avoid delaying their bedtime by more than one hour. Get them up the next day within two hours of their regular schedule, and, if they're sleepy during the day, encourage them to take an early afternoon nap.

Should parents give alcohol to their kids?